Truth Has a Power of Its Own: Conversations about a People's History (Hardcover) 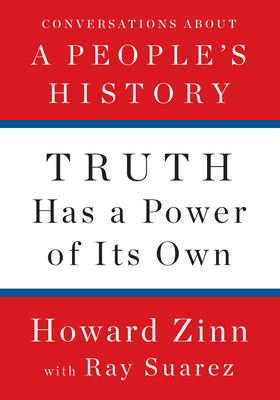 Truth Has a Power of Its Own: Conversations about a People's History (Hardcover)

Never before published, an extraordinarily inspiring and radical conversation between Howard Zinn and PBS/NPR journalist Ray Suarez, wherein American history is turned upside down--published to coincide with the tenth anniversary of Zinn's death

Truth Has a Power of Its Own is an engrossing collection of never-before-published conversations with Howard Zinn, conducted by the distinguished broadcast journalist Ray Suarez in 2007, that covers the course of American history from Columbus to the War on Terror from the perspective of ordinary people--including slaves, workers, immigrants, women, and Native Americans.

Viewed through the lens of Zinn's own life as a soldier, historian, and activist and using his paradigm-shifting People's History of the United States as a point of departure, these conversations explore the American Revolution, the Civil War, the labor battles of the nineteenth and twentieth centuries, U.S. imperialism from the Indian Wars to the War on Terrorism, World Wars I and II, the Cold War, and the fight for equality and immigrant rights, all from an unapologetically radical standpoint. Longtime admirers and a new generation of readers alike will be fascinated to learn about Zinn's thought processes, rationale, motivations, and approach to his now-iconic historical work.

Suarez's probing questions and Zinn's humane (and often humorous) voice--along with his keen moral vision--shine through every one of these lively and thought-provoking conversations, showing that Zinn's work is as relevant as ever.

Howard Zinn (1922-2010) was a historian, playwright, and activist and the author of the bestselling A People's History of the United States. He received the Lannan Literary Award for nonfiction and the Eugene V. Debs Award for his writing and political activism. Ray Suarez is co-host of the public radio program and podcast World Affairs. He was chief national correspondent for PBS NewsHour and the host of Talk of the Nation on NPR. He is the author of several books, including Latino Americans, as well as Truth Has a Power of Its Own: Conversations About A People's History (The New Press).