Empire of Rubber: Firestone's Scramble for Land and Power in Liberia (Paperback) 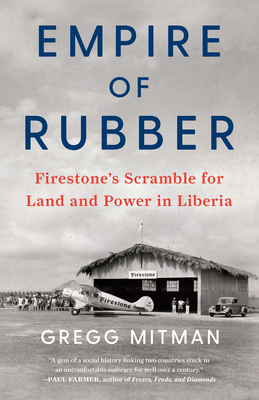 Empire of Rubber: Firestone's Scramble for Land and Power in Liberia (Paperback)

In a book Paul Farmer called "a gem of a social history linking two countries stuck in uncomfortable embrace for well over a century," award-winning author and filmmaker Gregg Mitman tells a sweeping story of capitalism, racial exploitation, and environmental devastation, as Firestone transformed Liberia into America's rubber empire.

Scouring remote archives to unearth a story of promises unfulfilled for the vast numbers of Liberians who toiled on rubber plantations built on taken land, Mitman "peppers this history with a wealth of fascinating details and interesting characters" (Foreign Affairs), revealing a system of racial segregation and medical experimentation that reflected Jim Crow America--on African soil.

Called "a brilliant, compelling read" by Princeton scholar Rob Nixon, Empire of Rubber, now available in paperback, provides a riveting narrative of ecology and disease, of commerce and science, and of racial politics and political maneuvering--the hidden story of a corporate empire whose tentacles reach into the present.

Gregg Mitman is the Vilas Research and William Coleman Professor of History, Medical History, and Environmental Studies at the University of Wisconsin-Madison. An award-winning author and filmmaker, his recent films and books include The Land Beneath Our Feet and Breathing Space: How Allergies Shape Our Lives and Landscapes. The author of Empire of Rubber (The New Press), he lives near Madison, Wisconsin.