Learning From Russia's Recent Wars: Why, Where, and When Russia Might Strike Next (Rapid Communications in Conflict & Security) (Paperback) 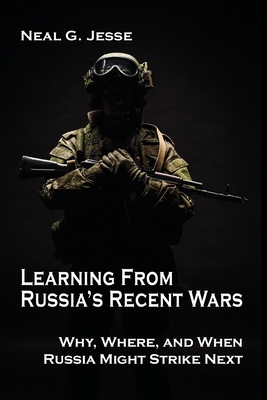 By Neal G. Jesse
Email or call for price

*This book is in the Rapid Communications in Conflict and Security (RCCS) Series (General Editor: Geoffrey R.H. Burn).

With the consolidation of the Russian state under the rule of Vladimir Putin, Russia has begun to assert itself on the international stage to a degree that has not been seen since the end of the Soviet Union. In particular, Russia has engaged in a number of aggressive actions against its neighbors (e.g., Georgia, Ukraine) while also re-asserting its interests in Eastern Europe, the Middle East, Central Asia, and more generally in global forums. Chief among this new assertiveness is the development of non-conventional assets of propaganda, information technology, communications, space-based assets, and cyber technology.

While many have discussed the rise of asymmetrical warfare, Russian foreign policy, and Russia's post-Soviet wars, what makes this book unique is how it puts these discussions together into a cogent analysis of contemporary Russian foreign policy alongside current international relations theories. This study examines Russia's recent wars in the Caucasus and Eastern Europe and outlines the focus of Russian assertiveness in key regions central to their security interests. Further, it elucidates the threat that Russian conventional and unconventional warfare poses to populations in Eastern Europe, Central Asia, and elsewhere. In addition, the book highlights the propensity of Russian military thinkers to see a blurring of the line between peace and war, and how Russian capabilities are being used to take advantage of this blurred line.

In the book's conclusion, prescriptions are made as to how the Western powers, and especially the United States, can attempt to blunt Russian aggression, particularly against NATO nations. Among these prescriptions is that the West must rebut the current Russian information and propaganda campaigns in Europe and elsewhere. Further, the West must recognize the increased Russian flexibility to respond to unexpected and spontaneous events in nations around the globe with the development of its information, cyber, and propaganda assets. The conclusion asserts that defense of key Western allies such as the Baltic Republics requires not only a conventional presence (such as NATO forces) but also the development and deployment of asymmetrical assets to counter the Russian capabilities.