The Hope of Elephants (Hardcover) 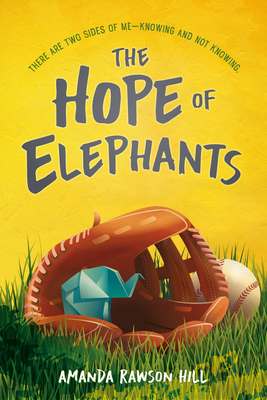 The Hope of Elephants (Hardcover)


Ships to Our Store in 1-5 Days
An inspiring coming-of-age novel in verse about weathering the uncertainty that comes with family illness perfect for fans of Starfish and Red, White, and Whole.

Cass and her parents haven’t let her dad’s cancer stop them from having a good life—full of love and poems and one annual World Series game. Now that Dad’s cancer is back, Cass overhears the doctor say that she has a 50% chance of inheriting her dad's genetic mutation, Li-Fraumeni syndrome. There’s a genetic test Cass can take that will tell her for sure. There’s still so much she wants to do—play baseball, study at the zoo, travel the world with her best friend, Jayla. Would it be better not to know?

When it turns out Dad’s cancer is worse this time, Cass is determined to keep up their World Series tradition while navigating all the change and uncertainty that lies ahead.

Poignant and powerful, Cass’s story brings the pains and anxiety linked with illness to the surface, and reminds us that sometimes hope is worth holding on to.

Amanda Rawson Hill never thought she was a writer growing up. But then the need to write tugged at her. The Hope of Elephants is based on an inherited genetic syndrome that affects members of Amanda's family. Amanda is also the author of one picture book, You'll Find Me, and a middle-grade novel, The Three Rules of Everyday Magic. Amanda also enjoys playing the piano, knitting, reading, homeschooling her children, playing board games, and eating kale.

A tween holds on to hope as her father repeatedly battles cancer.

Ever since she was 4, Cass and her parents have attended every World Series, the trips a gift to her father from his former employer as he was fighting his second round of cancer. Now, he’s been diagnosed with yet another kind of cancer, but Cass is determined they’ll get to go one last time. On her 12th birthday, Cass learns that her dad has Li-Fraumeni syndrome, a gene mutation that makes him susceptible to cancer—and there’s a 50% chance that she has it too. Now, she must decide if she will take a test to see whether she carries a mutated p53 gene. Hope comes from a study of elephants, which have 20 sets of p53 genes—a doctor is even studying elephants at her local zoo in Utah. Beautifully told in verse, the novel contains hopeful imagery inspired by Cass’ persistence, visits to the zoo’s elephants, and the family’s faith, which is effortlessly woven into the narrative and is cued as being the Church of Jesus Christ of Latter-day Saints. Literature rarely portrays life with someone who is immunocompromised; this story shows the limitations Cass faces at times, for example, in seeing friends and playing baseball. She’s also home-schooled in part to help keep her father safe. Cass and her family are presumed White.


On her 12th birthday, Cassandra Hollens’s father is diagnosed with Li-Fraumeni syndrome, a mutated p53 gene that makes him susceptible to cancer (which “visits my dad/ in all the odd years/ of my life”). Cass is used to the routine that attends his cancer treatment—trips to the hospital, sanitizing, and homeschooling to avoid germs—but when she realizes she may have the same mutation, she grapples with whether to find out for sure. As her dad’s condition worsens, Cass looks into a local study of elephants, which have 20 sets of the cancer-fighting p53 gene, and seeks a way to get her dad to another World Series, which the family has attended eight times following an early bout of his illness. This compassionate verse novel by Hill (You’ll Find Me) holds space for Cass’s wide-ranging feelings, tracing through the tween’s blunt, realistic voice the way that baseball, close friendships, and the family’s connection to the Church of Jesus Christ of Latter-day Saints, offer succor. An ongoing pro/con list reveals Cass’s relatable struggles and closely held dreams—to play baseball, travel the world—but also a stark truth: life can’t be boiled down to a list. Protagonists read as white; Cass’s best friend cues as Black. Ages 10–up.