Invasion of the Unicorns (Hardcover) 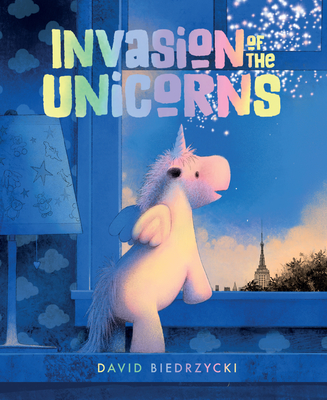 Invasion of the Unicorns (Hardcover)


Ships to Our Store in 1-5 Days
He's just a cute little unicorn who wants to take over the world.

Special Agent Bubble07 is undercover on planet Earth. His mission: to decide whether his team of alien unicorns should invade Earth. Posing as a stuffed animal, he infiltrates the home of Earthling Daughter, where he puts up with dog slobber, tea parties, and show and tell. Will the unicorn blow his cover and call for backup? Or will his alien heart be won over by storytime, snow days, and snuggles?
David Biedrzycki is the author and illustrator of the Breaking News series, the Ace Lacewing, Bug Detective series, and the Me and My Dragon series. He has been creating illustrations for book publishers, advertising agencies, magazines, and design firms since 1980. His art has graced the cover of KidSoft magazine, New England Aquarium billboards and children's software packaging, such as "The Amazon Trail" and "Odell Down Under." David has collaborated with children's author Jerry Pallotta on The Beetle Alphabet Book, The Boat Alphabet Book, and The Freshwater Alphabet Book. He grew up in Pennsylvania and now lives in Massachusetts with his wife and three children.
♦ When an alien unicorn descends to Earth, its mission morphs from embedded surveillance of an Earth family to just plain fun.
Bubble07’s log entries, addressed “Dear Fearless Leader,” comprise the narration. “You were right. We look exactly like the toy animals here.” Should the unicorn army invade Earth? To find out, Bubble07 wriggles into an arcade’s glass box full of plushy prizes and gets hooked by a dad for his daughter. (Dad and daughter present Black; mom, seen later, is a woman of color.) About Earthling Daughter, Bubble07 reports: “She loves her toys. She loves them to pieces! Some are missing their eyeballs. Is this going to happen to me?” Biedrzycki’s expert illustrations form a hilarious counterpoint to the alien’s clueless reportage. They begin in grayscale, accented by Bubble07’s otherworldly streams of neon-hued sparkles, as the spy experiences family camping and “show and share” at school. The jealous family sheepdog tries to bury Bubble07 in the backyard, but revenge is sweet: At night, discovering “amazing” peanut butter cookies, the spy leaves the empty bag next to the sleeping dog. “Fearless Leader…I must get this cookie recipe for our planet.” By Day 50, a snow day, full-color spreads depict the unicorn integrating into family life, experiencing Earthling Daughter’s birthday, cuddly bedtime stories, and a sick day as stand-in comfort animal. On the home planet, Bubble07’s final report recommends: “forget the invasion and send more of us to Earth for… / …a Unicorn Vacation!”
Simply delightful (with a wry final twist).
—Kirkus Reviews, starred review

Tasked with determining if Earth is ripe for invasion by the unicorn army, Secret Agent Bubble07, looking exactly like a toy stuffed unicorn, infiltrates an arcade claw machine and is soon brought home by a clueless Earthling child. Humans are a confusing bunch, Bubble07 reports to the unicorns’ Fearless Leader, letting dirty furry animals into their home, riding on a yellow transport with other noisy Earthlings, and sitting around a fire eating “something called Sa-morrs.” By day 32, the agent is ready to call in a rescue—but wait: then there’s snow, and cake, and bedtime stories, and hugs, and maybe Earth isn’t so bad after all. This is a playful little tale with a touch of ironic humor, and Bubble07’s dutiful reporting makes a amusing contrast to the visual details. The illustrations are compellingly structured, as the book begins in mostly black and white, echoing a mixture of Brian Selznick’s graceful shading with Dan Santat’s goofy cartooning, and then carefully moves into a world of color with unicorn pastels and cheerful pops of brightness. While some human figures are stiff and awkward, the stubby-legged, slightly poofy unicorn and their brown-skinned Earthling child make an adorable pair. This is clever in its sweetness, and sharp-eyed viewers will enjoy catching the occasionally appearing llama who mischievously eyes the audience throughout the book, perhaps on a mission of reconnaissance as well.
—The Bulletin

In author-illustrator David Biedrzycki’s hilarious new picture book, secret agent Bubble07 is an alien who happens to look like a plush unicorn and has been tasked with a challenging mission: to infiltrate a human Earthling family and determine if the unicorn army should invade Earth.

Bubble07 is beamed down into a video arcade, where a lucky dad snags it in the claw machine. In a series of interplanetary dispatches, the absurdly adorable unicorn agent files reports on daily life with its new family—an existence made somewhat more difficult by the family’s very huge, very hairy dog, whom Bubble07 suspects “might be onto me.” As time passes, Bubble07 relays many Earthling customs and delicacies that could improve life on the home planet, such as celebrating birthdays, telling bedtime stories and, above all, eating peanut butter cookies.

Bubble07’s primary Earth contact is the family’s daughter, who hosts tea parties, brings the unicorn to school for show and tell, takes swimming lessons (Alert to home planet: Unicorns don’t float.) and gives the agent lots of loving snuggles. After 100 days, Bubble07 has gathered enough clandestine intelligence to make a final recommendation to its “fearless leader” as to the suitability of Earth for unicorns.

Thanks to the book’s large-format design, inventive text and a final twist in the endpapers, Invasion of the Unicorns succeeds on every level. Biedrzycki has crafted a read-aloud that will delight children, and its wry humor means that adults won’t mind repeat reads. Bubble07 is an endearing protagonist who surveys our world with curiosity and occasional alarm that Biedrzycki always plays for a lighthearted laugh. His pencil and watercolor illustrations are soft and warm as they portray a loving family and their diverse community.

This agent can only conclude this report by declaring Invasion of the Unicorns a treat for unicorn lovers in every galaxy.
—BookPage