Undercover Girl: The Lesbian Informant Who Helped the FBI Bring Down the Communist Party (Paperback) 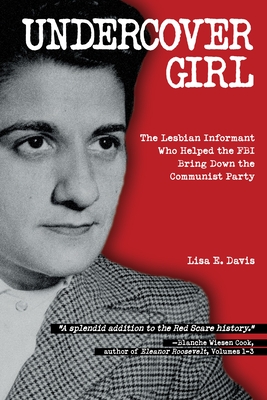 At the height of the Red Scare, Angela Calomiris was a paid FBI informant inside the American Communist Party. As a Greenwich Village photographer, Calomiris spied on the New York Photo League, pioneers in documentary photography. While local Party oﬃcials may have had their sus-picions about her sexuality, her apparent dedication to the cause won them over.

When Calomiris testified for the prosecution at the 1949 Smith Act trial of the Party's National Board, her identity as an informant (but not as a lesbian) was revealed. Her testimony sent eleven party leaders to prison and decimated the ranks of the Communist Party in the US.

Undercover Girl is both a new chapter in Cold War history and an intimate look at the relationship between the FBI and one of its paid inform-ants. Ambitious and sometimes ruthless, Calomiris deﬁed convention in her quest for celebrity.

Lisa E. Davis has lived in Greenwich Village for many years and loves to write about it. With a PhD in Comparative Literature, Davis taught for years at SUNY and CUNY, published numerous essays, and lectured widely on New World and European literary topics. Her novel Under the Mink, a film noir tale of gay and lesbian entertainers in mob-owned Village nightclubs of the 1940s, was re-issued in 2015 to considerable acclaim. Her LGBTQ-themed short fiction and nonfiction have appeared in various domestic and foreign anthologies and periodicals.

Undercover Girl is the biography of Angela Calomiris, a Greenwich Village lesbian who worked with the FBI during the Red Scare. Historian and writer Lisa E. Davis brings together oral histories and archival research to understand why Calomiris so readily informed on and publicly testified against her own friends and neighbors, the supposed Communist fifth-columnists who were trying to bring down the United States….Davis’s work is sharp and clear, not just in her assessment of Calomiris, but also in acknowledging source limitations. Given the private nature of Calomiris’s personal and professional lives, available resources are clouded by the self-censorship of marginalized communities and the black marker of government censors. From the remaining fragments, Davis pulls together a remarkably solid biography with full disclosures where details are from questionable sources.
This is a biography with a specific focus. While Calomiris’s early years of hardship and final years in Rhode Island are mentioned, they are always positioned in relation to her involvement with the Red Scare. The result captures a snapshot of both Calomiris and of the moment of history that she would be forever tied to.
Davis has helped to ensure that Calomiris will not slip quietly into obscurity, taking with her uncomfortable questions of loyalty, survival, and the responsibilities of community. Calomiris’s life is of particular importance to those who exist outside of dominant society. She was the most feared kind of snitch–an undercover agent born into her “cover,” who used this shared identity to play upon her comrades’ trust.
–Foreword Reviews