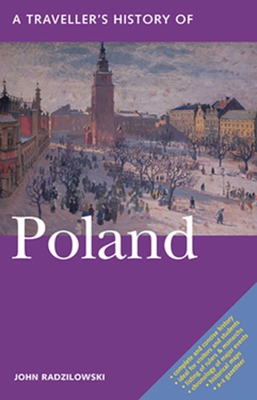 
Coming Soon - Available for Preorder Now
Poland is a major European country with nearly 40 million inhabitants and a land area comparable to Spain. It has played a major role in European history but its subjugation by foreign powers in the nineteenth century and during the Cold War eclipsed Poland in the minds of many in Western Europe and the United States. Throughout its long and diverse history it has been a meeting place of many cultures and has given the world the poetry of Czeslaw Milosz, the music of Chopin, and the scientific discoveries of Copernicus and Marie Curie, to name but a few.

In A Traveller’s History of Poland, John Radzilowski vividly describes the beginnings of the country, first fragmented then reborn to overcome the aggression of the Teutonic Knights and its greedy neighbors. Poland enjoyed a Golden Age in the fifteen and sixteenth centuries but a gradual decline then led to Poland losing its autonomy despite winning many battles with its army’s legendary military skill and gallantry. Yet the spirit of the country and its people lived on.

Since the horrors of the Second World War and Soviet control, Poland has gradually regained its rightful place in Europe, joining NATO in 1989 and in May 2004, the EU. It is playing a new role on the European and international stage. This makes now an ideal time to introduce students and travellers to Poland and its complex history.

The book includes a full chronology, a list of monarchs and rulers, a gazetteer, historical maps and is fully illustrated.
John Radzilowski, a Minnesota writer and historian, is the author of ten books, including the forthcoming Poles in Minnesota.
“An outstanding introduction to Poland’s complex and compelling history, from its ‘glorious achievements’ to its ‘tragic disasters’. …Accurate, interesting and highly readable…Well organized, crisply written, and handy to use, the volume…should be indispensable to travellers, as the title suggest. But it also deserves a place on the shelves of Poles and Polish-Americans and of general readers interested in the historical, geopolitical, cultural, and social development of [the] country.”