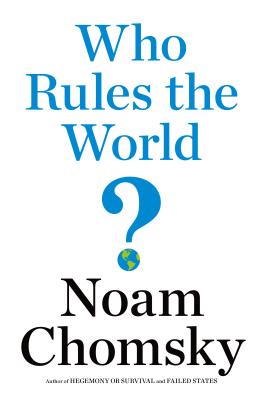 The world’s leading intellectual offers a probing examination of the waning American Century, the nature of U.S. policies post-9/11, and the perils of valuing power above democracy and human rights

In an incisive, thorough analysis of the current international situation, Noam Chomsky argues that the United States, through its military-first policies and its unstinting devotion to maintaining a world-spanning empire, is both risking catastrophe and wrecking the global commons. Drawing on a wide range of examples, from the expanding drone assassination program to the threat of nuclear warfare, as well as the flashpoints of Iraq, Iran, Afghanistan, and Israel/Palestine, he offers unexpected and nuanced insights into the workings of imperial power on our increasingly chaotic planet.

In the process, Chomsky provides a brilliant anatomy of just how U.S. elites have grown ever more insulated from any democratic constraints on their power. While the broader population is lulled into apathy—diverted to consumerism or hatred of the vulnerable—the corporations and the rich have increasingly been allowed to do as they please.

Fierce, unsparing, and meticulously documented, Who Rules the World? delivers the indispensable understanding of the central conflicts and dangers of our time that we have come to expect from Chomsky.

Noam Chomsky is the author of numerous bestselling political works, including Hegemony or Survival and Failed States. A laureate professor at the University of Arizona and professor emeritus of linguistics and philosophy at MIT, he is widely credited with having revolutionized modern linguistics. He lives in Tuscon, Arizona.

"Chomsky’s book is . . . a polemic designed to awaken Americans from complacency. America, in his view, must be reined in, and he makes the case with verve. . . . We should understand it as a plea to end American hypocrisy, to introduce a more consistently principled dimension to American relations with the world, and, instead of assuming American benevolence, to scrutinize critically how the US government actually exercises its still-unmatched power."
—The New York Review of Books

"Chomsky is a global phenomenon. . . . He may be the most widely read American voice on foreign policy on the planet."
—The New York Times Book Review

"With relentless logic, Chomsky bids us to listen closely to what our leaders tell us—and to discern what they are leaving out. . . . Agree with him or not, we lose out by not listening."
—BusinessWeek

"How did we ever get to be an empire? The writings of Noam Chomsky—America's most useful citizen—are the best answer to that question."
—The Boston Globe

"It is possible that, if the United States goes the way of nineteenth-century Britain, Chomsky's interpretation will be the standard among historians a hundred years from now."
—The New Yorker

"For anyone wanting to find out more about the world we live in . . . there is one simple answer: read Noam Chomsky."
—New Statesman