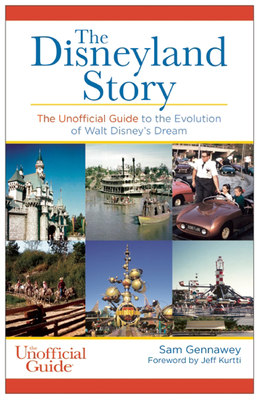 
Ships to Our Store in 1-5 Days
From the publisher of The Unofficial Guide to Disneyland comes The Disneyland Story: The Unofficial Guide to the Evolution of Walt Disney's Dream, the story of how Walt Disney's greatest creation was conceived, nurtured, and how it grew into a source of joy and inspiration for generations of visitors. Despite his successors' battles with the whims of history and their own doubts and egos, Walt's vision maintained momentum, thrived, and taught future generations how to do it Walt Disney's way.

Sam Gennawey is the author of Walt and the Promise of Progress City, a contributor to Planning Los Angeles and other books, as well as a columnist for the popular MiceChat website. His unique point of view built on his passion for history, his professional training as an urban planner, and his obsession with theme parks has brought speaking invitations from Walt Disney Imagineering, the Walt Disney Family Museum, Disney Creative, the American Planning Association, the California Preservation Foundation, the California League of Cities, and many Disneyana clubs, libraries, and podcasts. He is currently a Senior Associate at the planning firm of Katherine Padilla and Associates. Jeff Kurtti is author of more than 30 books, a writer-director-producer of award-winning documentaries, and a respected public speaker, host, and moderator. Kurtti is an expert on pop culture and entertainment. He is a consultant to clients in the motion picture, theater, museum/exhibit and themed-entertainment industries. He was creative director, content consultant, and media producer for the cornerstone exhibit of The Walt Disney Family Museum in San Francisco that opened in 2009. In 2012, he served as a content consultant and media producer for the touring exhibit The Dream of Walt Disney on behalf of Disney Japan. He lives in Langley, WA.