Capitalism: The Age of Unmasked Gods and Naked Kings (Manifesto of the Democratic Civilization) (Paperback) 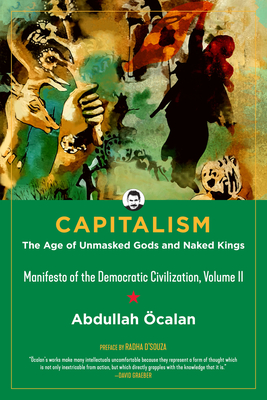 Abdullah Öcalan makes the convincing argument that capitalism is not a product of the last four hundred years but a continuation of classical civilization. Unlike Marx, Öcalan sides with Braudel by giving less importance to the mode of production than to the accumulation of surplus value and power, thus centering his criticisms on the capitalist nation-state as the most powerful monopoly of economic, military, and ideological power. He argues that the fundamental strength of capitalist hegemony, however, is the competition in voluntary servitude that a market economy has given rise to—not a single worker would reject higher wages—resulting in an unprecedented ability to convince people to surrender their individual power and autonomy. Öcalan further contends that the capitalist phase of city-class-state-based civilization is not the last phase of human intelligence; rather, the traditional morals upon which it is based are being exhausted and the intelligence of freedom is rising in all its richness.

Abdullah Öcalan actively led the Kurdish liberation struggle as the head of the PKK from its foundation in 1978 until his abduction on February 15, 1999. Havin Guneser is an engineer, journalist, and women‘s rights activist who writes and speaks extensively on the topic of revolution in Rojava. Radha D‘Souza is a reader in law specializing in international law and development, law in third-world societies, and resource conflicts in the third world.

"Öcalan builds upon the past insights to provide what is, in my opinion, the most succinct and most elaborate definition of democracy." —Andrej Grubacic, coauthor of Wobblies and Zapatistas: Conversations on Anarchism, Marxism and Radical History

"Öcalan presents himself as an outstanding expert on European intellectual history as well as the history and culture of the Near and Middle East. Against this background he reflects on the state of the international system and the conflict region of the Middle East after the collapse of real socialism as well as—very self-critically—the history of the PKK and his own political actions." —Werner Ruf, political scientist and peace researcher

"Öcalan is the Gramsci of our time." —Tamir Bar-On, author of The World Through Soccer: The Cultural Impact of the Global Sport

"Öcalan’s works make many intellectuals uncomfortable because they represent a form of thought which is not only inextricable from action, but which directly grapples with the knowledge that it is." —David Graeber author of Debt: The First 500 Years


"Öcalan's writings written in captivity are thus in the tradition of the ideology of the PKK as a left national liberation movement, which also includes the claim to change their own society. However, Öcalan is apparently also one of those whose political thinking was sharpened by the forced abstinence from daily politics and who succeed in further developing their political thinking in captivity." —Thomas Schmidinger, author of The Battle for the Mountain of the Kurds