13 1/2 Reasons Why Not to Be a Liberal: And How to Enlighten Others (Hardcover) 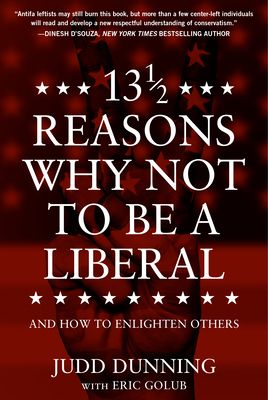 THE DEFINITIVE GUIDE TO WINNING AN ARGUMENT WITH A LIBERAL.

Antifa leftists may still burn this book, but more than a few center-left individuals will read 13 1/2 Reasons Why NOT to Be a Liberal and develop a new respectful understanding of conservatism." -- Dinesh D'Souza

"A must-read for those determined to defeat the unhinged left." -- Roger Stone

Although conservatives outnumber liberals in 44 out of 50 states, it's a situation conservatives know very well in today's contentious political environment: Conservatives often find themselves in discussions with liberals who relentlessly hammer conservatives with insults, accusations, and unfounded assumptions about conservatism.

The question is: WHAT IS A PROUD & INFORMED CONSERVATIVE TO DO? ?

The answer is: 13 1/2 Reasons Why NOT to be a Liberal: And How To Enlighten Others, the conservative playbook to persuasive facts and arguments that detail the policies, accomplishments, and often-ignored compassionate nature of the conservative philosophy. Presented in an easy-to-access format, Judd Dunning's ideological treatise will empower readers not only to hold their own in an argument with a liberal, but also to change hearts and minds, or at worst, preserve a few more mutually respectful relationships with more ease, clarity, and dignity.

Both a current and timeless conservative philosophical and argumentative manifesto made for conservative, right-leaning, independent, libertarian or "on the fence" Americans who are both passionate about politics and love being Americans.

If you can't achieve a win-win civil discussion with a liberal, at least you can use 13 1/2 Reasons Why NOT to be a Liberal to land some clear, intelligent blows. You will no longer serve as a liberal's doormat. You can maintain your pride and then move on to someone who really wants to both talk and listen. A Freethinker... probably a conservative

Judd Dunning (Los Angeles, CA) is an author, host, producer, and President of Conservatively Unplugged Media Group. Over his three decade-long political journey from liberal to conservative activist, Dunning has created and hosted the weekly television show Conservatively Unplugged! with Judd Dunning, his prior podcast Judd Dunning Unplugged! and his new show BulletPoints! With Michael Loftus and Judd Dunning. CU Media Group continues to bring together weekly some of the biggest names in politics and entertainment offering its own unique, unconventional and highly entertaining brand of political discourse. A four-year reoccurring Politicon talent, Dunning hosted and produced Politicon's popular celebrity panel "Right-Wing Comedy In These Trumptastic Times." His prior podcast is Judd Dunning Unplugged! and his 21-minute television pilot was CU! News Goes to Politicon. Dunning also created and moderated a celebrity panel based upon his new book 13 1/2 Reasons Why NOT To Be A Liberal. And Dunning also works as a conservative political TV correspondent. He recently appeared on Andy Cohen's show Then and Now and is seen on stage doing speaking and stand-up. Prior, Dunning graduated pre-law minoring in political science and economics at Colorado State University. He later attended the American Conservatory Theater and worked as an actor, filmmaker, writer, and comedian for 17 years. He went on to write, produce and direct over ten projects while also performing in a myriad of film, television and stage projects, and comedically touring North America. Later, Dunning excelled in real estate, becoming a top five Institutional Capital Markets Managing Director and then a real estate investment syndicator. Before launching CU! Media Group, Judd successfully sold millions of square feet of institutional real estate and raised over $100 million dollars in private equity. Dunning is an avid surfer and lives in West Los Angeles. His wife and two daughters are his life, making any other hobbies unnecessary and impossible. He wouldn't have it any other way. http: //www.dwg-re.com/index.htm https: //www.conservativelyunplugged.com/ BulletPoints! With Michael Loftus & Judd Dunning: https: //www.facebook.com/BulletPointsUSA/ https: //twitter.com/bulletpointsusa https: //www.youtube.com/channel/UCXKYFY4N7puYeFlDFLhH_RA https: //www.instagram.com/bulletpointsusa/?hl=en The author lives & works in the Los Angeles metro area.