The Corrosion of Conservatism: Why I Left the Right (Paperback) 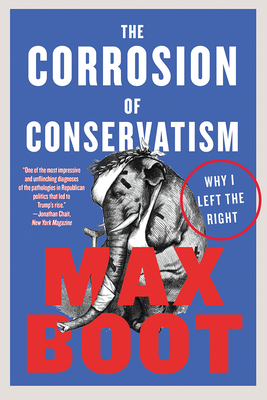 A “must read” (Joe Scarborough) by a New York Times– best- selling author, The Corrosion of Conservatism presents a necessary defense of American democracy.

Praised on publication as “one of the most impressive and unfl inching diagnoses of the pathologies in Republican politics that led to Trump’s rise” (Jonathan Chait, New York), The Corrosion of Conservatism documents a president who has traduced every norm and the rise of a nascent centrist movement to counter his assault on democracy. In this “admirably succinct and trenchant” (Charles Reichman, San Francisco Chronicle) exhumation of conservatism, Max Boot tells the story of an ideological dislocation so shattering that it caused his courageous transformation from Republican foreign policy advisor to celebrated anti- Trump columnist. From recording his political coming- of- age as a young émigré from the Soviet Union to describing the vitriol he endured from his erstwhile conservative colleagues, Boot mixes “lively memoir with sharp analysis” (William Kristol) from its Reagan-era apogee to its corrosion under Donald Trump.

Max Boot is a Senior Fellow at the Council on Foreign Relations, a columnist for the Washington Post, and a global affairs analyst for CNN. His most recent book is the New York Times bestseller The Road Not Taken: Edward Lansdale and the American Tragedy in Vietnam.