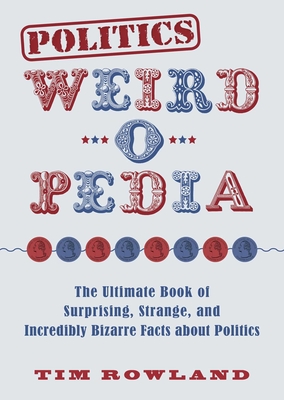 Government and politics might seem twisted today, but they’ve always been strange.

There’s something about public office that, throughout time, has transcended normalcy. Politics Weird-o-Pedia presents some of the oddest and most interesting political absurdities and tidbits from around the world, from Peter the Great’s tax on beards to a lawmaker’s mistress whom he kept on the congressional payroll despite her admission that “I can't type, I can't file, I can't even answer the phone.”

Tim Rowland has authored a number of books, including histories of the Adirondacks and Western Maryland mountains, and the Strange and Obscure series, collections of historical essays focusing on lesser-known aspects of American history. An avid outdoorsman, Rowland has climbed in the Himalayas, hiked the Inca Trail, trekked throughout Europe, and ridden a bicycle across the United States. He has climbed all 46 Adirondack High Peaks over 4,000 feet. He and his wife Beth live in Jay, New York.