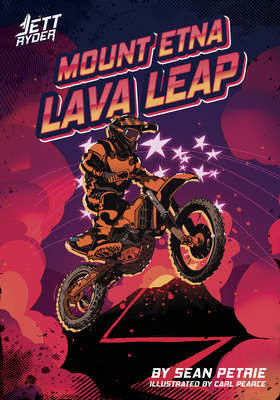 
Currently Unavailable
There's nothing Jett Ryder loves more than the spectacle of freestyle motocross stunts. But he finds a natural marvel almost as amazing when he learns about Mount Etna, a still-active volcano in Italy. He and his best friend Mika want to showcase the volcano's awesome beauty with his bike's own power. It's impossible for Jett to jump over the whole volcano, but Jett and Mika figure out a stunt just as cool. Can Jett soar past the lava in a feat as amazing as the volcano itself? Get set . . . for Jett Jett Ryder is the biggest name in freestyle motocross stunts. Not only can he pull off the biggest air and most death-defying tricks, but his stunts are in extreme places: Niagara Falls, the Space Needle, Mount Etna--even over the wreck of the Titanic. Plus, he's only twelve years old.