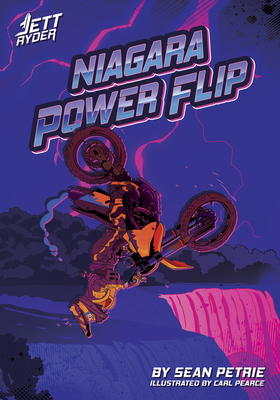 
Currently Unavailable
When Jett Ryder arrives at Niagara Falls, he knows he has a lot to prove. Jett needs his next freestyle motocross stunt to be more amazing than ever before. At first, Jett and his best friend Mika aren't sure what they should do--surely Jett can't jump all the way over the falls Then they discover the nearby statue of Nikola Tesla, one of the world's greatest inventors. As Jett and Mika learn more about Tesla, they come up with an electric idea. Can Jett pull off this never-been-done-before stunt? Get set . . . for Jett Jett Ryder is the biggest name in freestyle motocross stunts. Not only can he pull off the biggest air and most death-defying tricks, but his stunts are in extreme places: Niagara Falls, the Space Needle, Mount Etna--even over the wreck of the Titanic. Plus, he's only twelve years old.