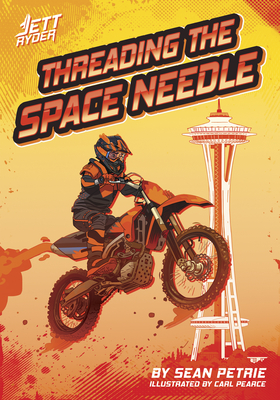 
Currently Unavailable
Jett Ryder has set his sights on the iconic Space Needle in Seattle. He and his best friend Mika want his next freestyle motocross stunt to be the hugest in the history of the sport. But figuring out the trick is tough--the Space Needle is way too tall to jump Then Jett and Mika realize that the answer is through, not over. Can Jett take motocross to the next level as he tries to literally thread the Needle? Get set . . . for Jett Jett Ryder is the biggest name in freestyle motocross stunts. Not only can he pull off the biggest air and most death-defying tricks, but his stunts are in extreme places: Niagara Falls, the Space Needle, Mount Etna--even over the wreck of the Titanic. Plus, he's only twelve years old.