Shut Up, Your Kid Is Not That Great (Paperback) 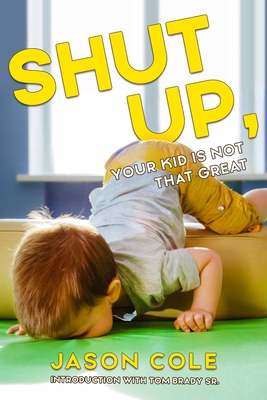 Shut Up, Your Kid Is Not That Great (Paperback)


Coming Soon - Available for Preorder Now
Are you a self-proclaimed "momager" or "dadager?" Do you think your kid is the ultimate best? This is the book for you!

We get it, you love your kid. But, let's face it: no matter how much you praise them, your kid is most likely not the next child prodigy. Be that as it may, we are pretty sure the neighbors are tired of hearing about how the fruit of your loins got the lead in the school play or scored the most points in the last game when they are just trying to grab a burger at the barbecue.

Shut Up, Your Kid Is Not That Great is the book for every parent who has ever tried to live vicariously through their child, or claim the title of "momager/dadager" at every possible extracurricular activity. We are also looking at you serial social media boasters.

- Your kid can carry a tune? Shut up, they are not the next Whitney Houston.

- Your kid scored the most goals out of anyone on the soccer team? Shut up, they are not the next Cristiano Ronaldo.

- You didn't get straight As but your kid does? Shut up, they are not the next Elon Musk. . . although they might be one of his kids.

- Your kid spends 24/7 on their phone and has a TikTok account? Shut up, they are not the next big online influencer or YouTuber.

Filled with brief banter and an inspiring introduction by Tom Brady Sr., this book is sure to add a much needed laugh or two to every parent's day!
Jason Cole has covered or written about pro football since 1992 and has been a selector for the Pro Football Hall of Fame since 2013. He has worked for publications such as Bleacher Report, Yahoo! Sports, The Miami Herald, and the Fort Lauderdale Sun-Sentinel. Cole has authored Elway: a Relentless Life and co-authored six books, including Giant with Plaxico Burress, Heart for the Game with Simon Keith, and Ocho Cinco with Chad Johnson. Prior to covering the NFL, Cole covered the NBA, Major League Baseball, and high school sports in the San Francisco Bay Area. Cole teaches sports writing at the University of Florida and is the father of two Eagle Scouts. He is a graduate of Stanford University, which he attended at the same time as Elway.