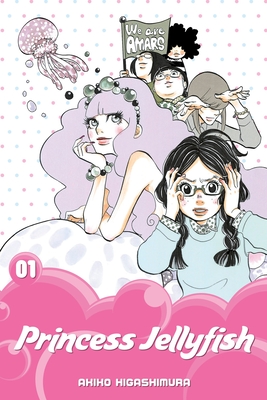 This is book number 1 in the Princess Jellyfish series.

Named by the American Library Association and the New York Public Library as one of the top young adult books of the year!

THE LONG-AWAITED STORY OF FANGIRLS TAKING ON TOKYO!
Special large-size 2-in-1 edition of over 400 pages!

"One of the best anime and manga for beginners. Enthusiasm - geeky and otherwise - is power in Princess Jellyfish. Enthusiasm saves the day and paves the road to the future." - Kotaku

"Princess Jellyfish's ambition is simple: to tell a delightful story in a delightful way... It's a pretty deadly one-two punch." - Anime News Network

Tsukimi Kurashita has a strange fascination with jellyfish. She’s loved them from a young age and has carried that love with her to her new life in the big city of Tokyo. There, she resides in Amamizukan, a safe-haven for girl geeks who regularly gush over a range of things from trains to Japanese dolls. However, a chance meeting at a pet shop has Tsukimi crossing paths with one of the things that the residents of Amamizukan have been desperately trying to avoid—a beautiful and fashionable woman! But there’s much more to this woman than her trendy clothes! This odd encounter is only the beginning of a new and unexpected path for Tsukimi and her friends.
One of Japan's most popular authors of manga for women, Akiko Higashimura has created more than a dozen series, including Kakukaku Shikajika and Mama's A Temparist. After its adaptation into a popular anime and live-action film, Princess Jellyfish is her first work to be released in English, making her one of the Japanese manga world's best-kept secrets.