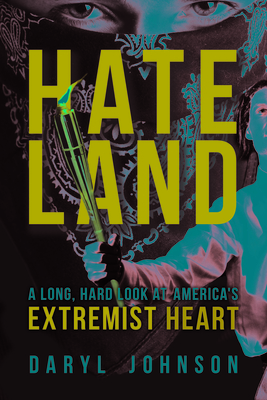 A former Department of Homeland Security analyst takes a long view on the domestic terrorism threat from radicalized individuals and hate groups of various ideologies.

America is a land in which extremism no longer belongs to the country's shadowy fringes, but comfortably exists in the national mainstream. That is the alarming conclusion by intelligence analyst Daryl Johnson, an expert on domestic extremism with more than twenty-five years of experience tracking radicalized groups for the US government.

In this book, Johnson dissects the rapidly expanding forms of American hatred and radicalization, including white nationalists, antigovernment militias, antifascists (Antifa), militant black nationalists, and extremist Islamic groups. The author develops a concise model that explains how extremists on both the far right and the far left use the same techniques to recruit and to radicalize individuals, turning them into violent offenders. He also examines the political forces that fuel this threat and have kept the US government from properly identifying and developing countermeasures to deal with it, including a disproportional emphasis on Islamic terrorism.

Johnson concludes by recounting individual stories of deradicalization, each of which was the result of personal reevaluations of formerly held extremist convictions. He recommends more resources at the state and federal levels for combatting radical movements and urges greater communication and coordination between law enforcement agencies. This in-depth analysis of a growing menace that has taken America hostage throws a stark light on the darkest segments of American society and provides practical means for dealing with their violent threats.

Daryl Johnson is one of the foremost experts on domestic extremist groups in the United States. Beginning his career as a civilian in the US Army, Johnson has held a number of government positions, most recently as a senior analyst at the Department of Homeland Security. He works at a private consulting firm for law enforcement, DT Analytics, which he founded. He is also regularly cited, featured, or quoted in media covering domestic extremist groups in the United States, including the New York Times, Washington Post, Wall Street Journal, Newsweek, NPR, MSNBC, CNN, and NBC Nightly News, among many others. He is the author of Right-Wing Resurgence: How a Domestic Terrorism Threat Is Being Ignored. In 2012, he testified before the Senate Judiciary Committee on hate crimes and the threat of domestic extremism. Born in Warrenton, Virginia, he lives in Martinsburg, West Virginia.

"Timely, direct, and insightful as it captures the political present and its various subcultures. . . . Direct, powerful prose results in a disturbing look at the US. Every page seems to open new insights into the lives of those who hold alarming ideologies.”

“Hateland is easily among the top few contemporary works on the dangerous rise and evolution of American extremism. What separates it from much of the punditry out there is Johnson’s keen ability to weave his years of expertise into a thoroughly readable and straightforward book. Anyone concerned about the trajectory of our nation and interested in the story of how we got here will find this work invaluable.”

"Johnson offers us hope in an important and timely book that provides an antidote to hate. He addresses one of the most pressing issues of our time—the rise of domestic terrorism and how to effectively counter it—and outlines a surprising and significant solution.”

“Hateland examines and dissects various forms of extremism, explaining how the internet, social media, partisan politics, history, and cultural and religious differences are triggers behind violent and deadly hate crimes bombarding our society. There’s no doubt Johnson knows his stuff.”

“No one understands the deep dynamics behind the radicalization of so many Americans better than Daryl Johnson. In Hateland, he lays these undercurrents bare with surgical precision so that we can see and understand them. A superb book.”

—David Neiwert, author of Alt-America: The Rise of the Radical Right in the Age of Trump