The Sleeper Agent: The Rise of Lyme Disease, Chronic Illness, and the Great Imitator Antigens of Biological Warfare (Paperback) 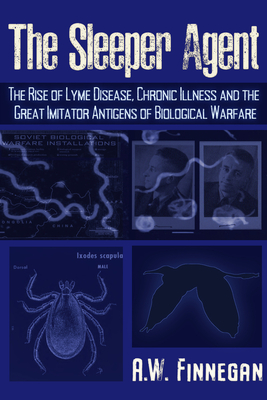 The Sleeper Agent: The Rise of Lyme Disease, Chronic Illness, and the Great Imitator Antigens of Biological Warfare (Paperback)

By A. W. Finnegan


Coming Soon - Available for Preorder Now
This book details out the esoteric history of biological warfare in a way that no other book has done, based on only official records, documents, science and medical journals, former intelligence officers, and more. The history of this war goes much deeper than any other book on the subject has presented, based on understandings and studies of science that have been purposefully buried and obscured. The author collected and studied the work of one of history’s most exceptional yet infamous pioneers in virology and immunology, a German scientist by the name of Dr. Erich Traub, for several years, in the process of writing this book, a process which perhaps no one else has managed to undertake, until now.
A.W. Finnegan is a survivor of Lyme and immune tolerance, who has been battling health problems since he was young, with the onset of chronic disease in 2016. He is a writer, graphic artist & designer, researcher of history and spirituality. He runs a website and video program which he has named The Garden of Great Work, located at https://www.GardenofGreatWork.org to promote Natural Law, morality, and education on occultism, esoteric philosophy, and living aligned with Truth. He has been part of the One Great Work Network started by occult initiate Mark Passio. He has conducted diverse interviews guests from professor emeritus Richard B. Spence on the topics of Wall Street and the Russian Revolution, Aleister Crowley, to musicians like Jørn “Necrobutcher” Stubberud of the Norwegian black metal band, Mayhem. He has researched and advised for film projects on the history of biological warfare and the work of Dr. Erich Traub. He lives in Cape Cod by himself, his two pet scorpions, and his wide collection of books, and his sacred plants in the Nightshade Family (Solanaceae) such as Datura, Belladonna, Angel’s Trumpet, Henbane, Mandrake, and Solandra. He loves to read, research, and is an avid fan of heavy metal music.