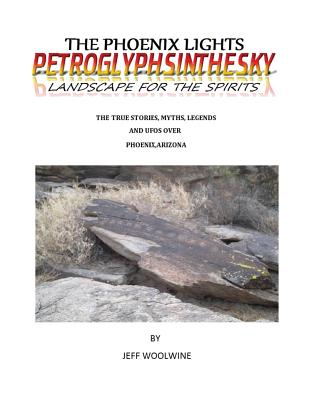 Jeff Woolwine is a resident of Phoenix, Arizona, living near South Mountain. Since the spring of 2004, Jeff has experienced many UFO sightings and has video taped most of his experiences. Jeff, a native to Arizona, is a man on a mission, with the intent of trying to solve the ongoing mystery of the Phoenix Lights. In this interview will cover Jeff's background, his research efforts, his experiences with the media in Phoenix, his recent sightings, and what Jeff thinks is behind these repeated appearances of UFOs in the Phoenix area. From Jeff, "I have been watching the Phoenix Lights since June 2004. I have determined that not only are the lights here, but that they appear to be tracked by the government. I have done several TV News interviews with Phoenix TV stations talking about flares and the lights. I have also found evidence that people living in this are 1500 years ago saw the lights as well. There are drawings all over Phoenix's South Mountain that show the lights and the geo-magnetic lines that are associated with fault lines, which may be used by the UFOs to absorb energy to power themselves - sort of like a gas station for UFOs. I have studied UFOs for years. I am out to prove that they are here and have never left us. Thousands of years ago, people left hieroglyphics and petroglyphs and documents such as the Dead Sea Scrolls and parts of the Bible showing evidence of UFOs and ETs. It seems like every time UFOs show up, something happens to the Earth. In my opinion, things are going to change our way of life very soon, and that is why the UFOs are here more than ever - to watch before and after". Jeff continues to capture videos of UFOs near South Mountain and is investigating the apparent connection between the UFOs he sees and the ancient petroglyphs that cover the rocks on South Mountain.