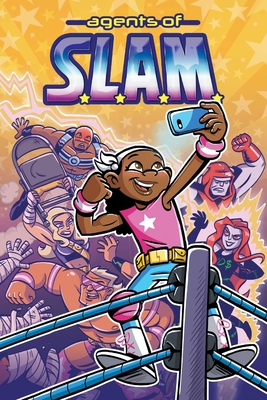 
Available at One of Our Locations
"This brilliantly animated, wonderfully written comic is such a fun read! I loved it and highly recommend it." — Rebecca Quinn aka Becky Lynch, Professional Wrestler

The Agents of S.L.A.M. aren’t your average professional wrestlers. They’re led by the fearless and famous Bruno Bravado and work for the president of the United States to protect people from all kinds of threats—both on Earth and in space! And they’ve just been joined by their newest recruit, Katie Jones, a twelve-year-old wrestling vlogger who just might know more about wrestling than the wrestlers themselves. S.L.A.M. will need Katie’s knowledge and skills if they’re going to keep protecting Earth, especially when their toughest rival challenges them!
Dave Scheidt is a writer from Chicago, Illinois. When he’s not making comic books, he enjoys eating pizza. He’s the writer and co-creator of Wrapped Up with Scoot McMahon, and Mayor Good Boy with Miranda Harmon.

Scoot McMahon is a versatile cartoonist based out of Rossford, Ohio. His catalogue of comics includes Wrapped Up (ONI/Lion Forge), Tales from the Con (IMAGE), Aw Yeah Comics (Dark Horse), Sami the Samurai Squirrel, and Spot on Adventure (Action Lab). Scoot is currently working on books for Source Point Press and DC Comics. When Scoot isn't cartooning, he enjoys dropping flying elbows from the top rope!

Heidi Black makes art magic in their Cincinnati apartment. Their other works include a piece in the Eisner-winning anthology Puerto Rico Strong and the graphic novel series Sons of Fire, both written by Adam L. Garcia. Heidi also spends a good deal of time playing video games, and even more time keeping their cat off of their art (usually unsuccessfully).
"Raucous fun for middle-grade readers who are starting to grow out of Dog Man."
— Booklist

“Agents of S.L.A.M. takes the simple and awesome concept of professional wrestling and a young fan and turns it up to one hundred. It’s got everything you’d want from a graphic novel: superhero pro wrestlers, a world in jeopardy, heel turns, gruesome grannies, friendship, families, and treacherous villains."
— Rebecca Quinn aka Becky Lynch, Professional Wrestler

“I’ve known for years that Dave Scheidt and Scoot McMahon were talented comic creators, and now, they’re poised to win gold with Agents of S.L.A.M.! Tagging in Heidi Black’s vibrant colors to the team, they’ve made an amazing combination of superheroes, professional wrestling, and all-ages action!! Championship material through and through!!”
— “Fallen Angel” Christopher Daniels, professional wrestler (AEW)