The World Spins By: A Gift of Time, Love, and the Long Bike Ride Back to Myself (Paperback) 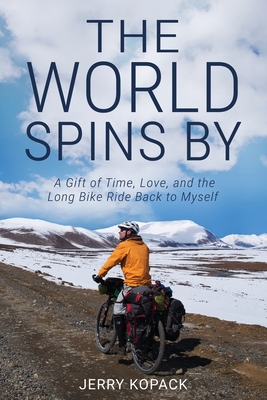 The World Spins By: A Gift of Time, Love, and the Long Bike Ride Back to Myself (Paperback)

In three months, Jerry thought he lost everything-his meaningful career, the woman he was supposed to grow old with, and a close friend to a terminal illness-but he soon realized that he was given a gift.

Jerry had worked in corporate America for 10 soulless years, following a laminated road map to happiness handed to him at graduation from business school. Then he founded a hospice with his mother. Serving patients at the end of life, Jerry learned his greatest lesson, one not found in any textbook or cubicle-the value of time.

The World Spins By is an intimate journey of loss, curiosity, and love-recounted one pedal stroke at a time along Jerry's two-year bicycle journey back to himself. Over mountains in Tibet, across deserts in Israel, and even a clinic to treat worms in India, Jerry discovered that although you may have a map, real life is unscripted. It goes beyond the borders and occurs at the intersection of fear and control. Throughout the book he shares tales of comical and harrowing adventures on the road and lessons learned from his hospice career, while continually pondering the question, am I using my time well?