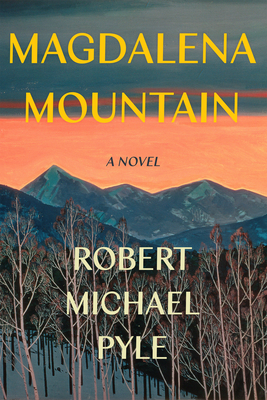 By Robert Michael Pyle
$16.95
Email or call for price

An elegant, eccentric novel of love, loneliness, and lepidoptera . . . Worthy company for work by other naturalist/novelists: Nabokov, Matthiessen, Kingsolver. --Kirkus Reviews
In Magdalena Mountain, Robert Michael Pyle's first and long-awaited novel, the award-winning naturalist proves he is as at home in an imagined landscape as he is in the natural one. At the center of this story of majesty and high mountain magic are three Magdalenas--Mary, a woman whose uncertain journey opens the book; Magdalena Mountain, shrouded in mystery and menace; and the all-black Magdalena alpine butterfly, the most elusive of several rare and beautiful species found on the mountain.
And high in the Colorado Rocky Mountain wilderness, sharing the remote territory of the Erebia magdalena butterfly, lives the enigmatic Oberon, a reluctant de facto leader of the Grove, a diverse community of monks who share a devotion to nature. Converging in the same wilderness are October Carson, a beachcomber-wanderer in pursuit of the alpine butterflies he collects for museums; James Mead, a young graduate student intent upon learning the ecology of this seductive creature; and Mary Glanville, who also seeks the butterfly but can't remember why.
While the mystery surrounding Mary takes a menacing turn, their shared quest pulls them deeper into the high mountain wilderness, culminating in a harrowing encounter on the stony slopes of Magdalena Mountain.

Robert Michael Pyle is the author of fourteen books, including Sky Time in Gray's River, Chasing Monarchs, Where Bigfoot Walks, and Wintergreen, which won the John Burroughs Medal. A Yale-trained ecologist and a Guggenheim fellow, he is a full-time writer living in southwestern Washington.

Praise for Where Bigfoot Walks

"Fast claiming his place as one of the country's finest natural history writers, Pyle takes to the hills in search of Bigfoot in this absorbing, classily written field report. Pyle makes all the right connections. Best of all, he loves a good mystery and is smart enough, open and radical enough, to never say never." —Kirkus Reviews

"Celebrated author Pyle, whose Wintergreen won a John Burroughs medal, is fascinated not so much by Bigfoot as he is by the people who believe that Bigfoot exists-and are trying to prove it." —Library Journal

"I like the book very much. Only, I don't know why you were so circumspect. To me, the evidence seems overwhelming." —Dr. Jane Goodall, in conversation with the author

"A search for the Pacific Northwest's fabled Bigfoot provides a jumping-off point for nature writer Robert Michael Pyle's lyrical ruminations on wilderness, isolation, and the occasional triumphs of mystery over so-called progress. Pyle's well-researched stomping ground is Washington State's Dark Divide in the Cascade Mountains… Pyle's route alternates between desolate clear-cuts and majestic ancient forests, between the inroads of civilization and the dark recesses of the wild. But never does the author get too caught up in proving anything to himself or the reader; this search for Bigfoot has as much to do with locating the wild nature within each of us as it does with finding a legend." —Amazon.com Editorial Pick

"Where Bigfoot Walks: Crossing the Dark Divide is a unique book in the bigfoot literature, one that is not so much concerned with whether the creatures exist or not, but rather one that focuses on the value of the mystery itself. Dr. Pyle's writing stands alongside those of the great naturalist writers and is full of wit and wisdom. Through his journey, we find that he intuitively understands what most lifetime bigfooters eventually come to know: that bigfooting is about the journey more than the destination." —Cliff Barackman, field researcher and star of Animal Planet's Finding Bigfoot

"Cross into the Dark Divide with Robert Pyle and you will find yourself in another world, a world where we are one among the animals, a deeper, more ambiguous world, where science answers some of the questions, and our hearts and imaginations answer (or seek to answer) the rest. 'In a class of its own' is an overused phrase, but Where Bigfoot Walks is so haunting and beautiful and bold that I can think of nothing else like it. Follow Bob into the woods, into the labyrinth that is the mystery of Bigfoot—you will find no better guide." —Molly Gloss, author of Falling From Horses, The Jump-Off Creek, Hearts of Horses, and Wild Life

"Splendidly lyrical and just as splendidly crusty, Where Bigfoot Walks is the sort of book Thoreau might have written if he had discovered giant footprints of an unknown origin in the vicinity of Walden Pond." —Lawrence Millman, author of Our Like Will Not Be There Again: Notes from the West of Ireland and Last Places

Praise for The Thunder Tree

"Pyle has written an engrossing story of at least two levels: a charming memoir of his youth on the canal and a sobering account of uncontrolled development and loss of habitat." —Publishers Weekly

"'The Thunder Tree' was a huge, hollow old cottonwood in which the author and his brother once found shelter as children from a life-threatening hailstorm. The tree grew along the High Line Canal, built in the late 19th century as part of a grand plan to bring river water to the Western plains for irrigation. Only a portion of the canal was ever built, but that portion happened to run through the city of Aurora, Colorado, where the author lived as a child and young adult ... this book is about the relationship between people and natural areas and how each affects the other." —Library Journal

"Pyle looks past the stumps and clear cuts to rediscover the essence of the Willapa Hills. Even though scarred from decades of logging this terrain is still a wilderness. The author puts the pieces together to create an example of nature trying to survive." —Krist Novoselic, former bassist of Nirvana

"Pyle shows himself here to be a cunning essayist who is able to bring to life a region little known . . . a love song to an overlooked—and overworked—land." —Kirkus Reviews

"Pyle has created a collection of vividly responsive observations and speculations about the diversity and requirements of life, from butterflies to bears" —Library Journal

"Not just a classic of Northwest nature writing and literature, Wintergreen is a book that transcends the wounded Willapa Hills where it is set and becomes a meditation on the relationship of all people to all places." —William Dietrich, author of Barbary Pirates

"In his new book, Chasing Monarchs, the naturalist Robert Michael Pyle chronicles his efforts to follow the monarchs on their winter migration by tracking them on the ground in a battered old Honda Civic. . . . The author's evident passion for and understanding of butterflies invest his narrative with energy and interest." ―The New York Times

"Victorian-era butterfly hunters are often portrayed as genteel aristocrats, but today's breed, like the author of this book, are gritty, adventurous, and far-wandering. Over two months and across 9000 miles, Pyle tracked and tagged monarch butterflies along their migratory route from northern British Columbia to Mexico. Because he is an ecologist, Pyle gives a solid general account of the state of scientific knowledge of the monarchs and their remarkable travels. Because he is also an award-winning natural history writer, he vividly conveys the lure of the butterflies, the quirky passions of those who study them, and the beauty and diversity of Western landscapes." —Library Journal

"Scientists know that monarch butterflies migrate thousands of miles each year between northern parts of the U.S. and Mexico or California, but no one has actually seen how they do it. So ecologist Pyle (Where Bigfoot Walks) decided to try. His method: to find individual butterflies at their northernmost habitat, follow them as far as possible, then repeat the process with other individual butterflies along the southward route. Amazingly, this haphazard approach worked. Pyle began near the Canadian border, at the Columbia River, and followed monarchs to the Mexican border, covering 9462 miles in 57 days and proving that western monarchs do not all migrate to California, as commonly believed . . . His memoir serves both as tribute to this majestic insect and as a thoughtful tour of the contemporary American West." —Publishers Weekly

"Chasing Monarchs tells the engrossing story of his adventurous journey with these graceful wanderers—down the Columbia, Snake, Bear, and Colorado rivers, across the Bonneville Salt Flats, and through the Chiricahua Mountains to Mexico, returning north along the California coast. Part travelogue, part scientific study, Chasing Monarchs is one of the most fascinating books ever written about butterflies." —Monarch News

"Pyle provides a deeply informed commentary that is an introduction to the natural history and lore of the monarch butterfly―the archetypal migratory species that has captured our imaginations―and extends to a larger story of why what happens to the monarch butterfly matters to us humans."―Francie Chew, Tufts University

"An instant classic . . . one of the very best accounts of a closely observed life." —Seattle Post-Intelligencer

"A testament to one person's determined attempt to live a rural life in complete concord with nature." —The Oregonian

"A beautiful, big-hearted book from a leading figure in the resurgence of American nature writing," —Kathleen Dean Moore, author of Great Tide Rising and Piano Tide