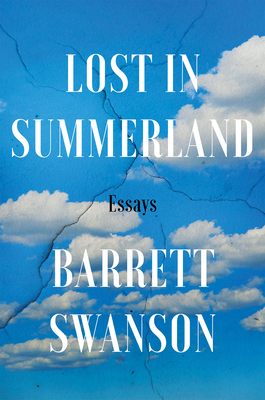 Barrett Swanson embarks on a personal quest across the United States to uncover what it means to be an American amid the swirl of our post-truth climate in this collection of critically acclaimed essays and reportage.

A trip with his brother to a New York psychic community becomes a rollicking tour through the world of American spiritualism. At a wilderness retreat in Ohio, men seek a cure for toxic masculinity, while in the hinterlands of Wisconsin, antiwar veterans turn to farming when they cannot sustain the heroic myth of service. And when his best friend’s body washes up on the shores of the Mississippi River, he falls into the gullet of true crime discussion boards, exploring the stamina of conspiracy theories along the cankered byways of the Midwest.

In this exhilarating debut, Barrett Swanson introduces us to a new reality. At a moment when grand unifying narratives have splintered into competing storylines, these critically acclaimed essays document the many routes by which people are struggling to find stability in the aftermath of our country’s political and economic collapse, sometimes at dire and disillusioning costs.

Barrett Swanson's essays have appeared in Harper's, The New Yorker, The Paris Review, The Believer, The New York Times Magazine, and The Atavist, among other publications. He is the recipient of a Pushcart Prize and has been anthologized in two editions of The Best American Travel Writing. He was the Halls Emerging Artist Fellow at the Wisconsin Institute for Creative Writing, and he and his wife live in Madison, Wisconsin.

“More than most writers, Barrett Swanson is a first-rate cultural anthropologist. Perceptive, amusing, searching, he scans and gazes past the variety of scrims the world has set out to cloud our vision. His brilliant essays bring so much back into focus, while also noting the American surrealism of the American dream. There is not a weak link in this collection. Every piece is a gem.” —Lorrie Moore

"Swanson . . . serves as a candid and empathetic narrator, guiding us with restrained cynicism and enticing prose as he interrogates the stories we tell ourselves to paper over truths we’d rather not face . . . His essays reveal a thinker willing to wrestle with the realization that there is more beyond his sight." —Albert Samaha, The New York Times Book Review

"Each essay in this timely collection takes readers down some of the more obscure rabbit holes people find themselves in as they attempt to make sense of society . . . These are not stories to explain what is happening right now and why, but stories of the people who are struggling to understand the what and the why of this modern moment." —Jenni Herrick, Shepherd Express

"[Swanson's] insights and inquiries offer something novel and fresh . . . Scrupulous and immersive, the individual pieces in Lost in Summerland coalesce to form a poignant snapshot of the myriad pathologies of contemporary culture, providing a unique and uncanny lens into our deranged zeitgeist." —25YL

"The 14 essays of Lost in Summerland range over the continental United States, but their travelogue is spiritual . . . Swanson’s book cuts deep with a shard of mirror, and I’m trying not to bleed." —Travis Diehl, The Los Angeles Review of Books

"The brilliance of these essays is their ability to illuminate the personal through the critical, the political, and the unflinching specifics of place while shining a light into that seemingly distant ideal—the universal." —Christopher Notarnicola, The Paris Review

"Monstrously enjoyable . . . It’s difficult to express Lost in Summerland’s excellence without using tired descriptors like 'urgent' and 'necessary,' but, alas, the book feels both urgent and necessary." —Brady Brickner-Wood, Ploughshares

"Lost in Summerland is a blend of empathetic reporting and incisive thinking that takes the reader on a guided tour of America’s wild, imaginative, and sometimes dangerous myths . . . In a book about the power and limitations of narrative, Swanson’s essays search out older, maybe kinder ways to say new things. Lost in Summerland reminds us that a good and well-told story can, sometimes quite literally, save a person’s life." —Suzannah Showler, Hazlitt

"Swanson’s perspectives are empathetic and honest. The people and situations he describes are considered with the care of a sociologist, but also a sensitive heart. The essay collection Lost in Summerland forwards a smorgasbord of ideas, people, and places, all filtered through the perceptions of a skilled writer." ––Peter Dabbene, Foreword Reviews

"With this eloquent and insightful collection of 14 essays, Swanson proves that his is an essential voice in the critique of a simultaneously surreal and vulgar modern age." —Angela Lutz, Shelf Awareness (starred review)

"This wide-ranging work is part literary collection, part cultural examination; it should appeal to armchair travelers interested in learning about different worldviews and finding meaning in the everyday." —Library Journal

"Swanson searches for sense and narrative in a world that is often senseless and even bleak . . . Swanson’s contemplative collection is relatable, timely, and thought-provoking." ––Booklist

“With potent lucidity and fierce intelligence, Barrett Swanson pierces the superficial arguments that make so much of our moment strange and alienating. The range of these essays is astonishing, but more electrifying still is the agility with which Swanson probes the deep mysteries of masculinity, ecological threat, capitalism, and race to reveal thrilling if terrifying connections. Barrett Swanson is a tremendous writer, and this collection provides one of the truest, most haunting portraits of our time I’ve ever read.” —Brandon Taylor, author of Real Life, finalist for the Booker Prize