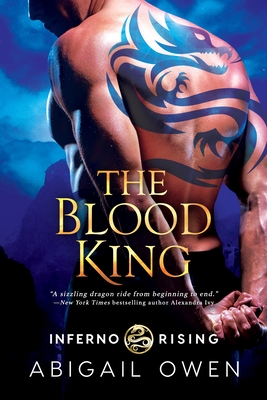 This is book number 2 in the Inferno Rising series.

Ruthless dragon king Ladon Ormarr must keep his throne—and his people—safe from the cruel High King at all costs. With war on the horizon, he’ll need a miracle to protect his clan. Luckily, the fates have dropped the irresistible Skylar Amon right into his lap.

Or so he thought. Because the last thing this phoenix wants is him.

A phoenix mate is the ticket to securing his throne, but this fiery Amon sister detests Ladon, doesn’t stick to protocols, and regularly offends his warriors and advisers.

Skylar also has no intention of sticking around, nor does she believe in the whole destined-mates thing. But if it means taking out the High King who murdered her parents, she'll put up with the too-sexy-for-her-sanity Ladon...temporarily.

Their mating bond may make them want to tear off their clothes, but outside the bedroom...well, Ladon is positive the fates hate him. Just as he starts to win over the mercurial phoenix, everything goes to hell when the High King makes his final move. And Ladon will burn down the world to keep the mate he is unwilling to live without.

Each book in the Inferno Rising series is STANDALONE:
* The Rogue King
* The Blood King

Paranormal romance author Abigail Owen grew up consuming books and exploring the world through her writing. No matter the genre, she loves to write feisty heroines, sexy heroes who deserve them, and a cast of lovable characters to surround them. Several of Abigail’s books have won, placed, or finaled in multiple contests. She is also the owner/operator of Authors On A Dime, a company which provides a la carte services to help authors like herself. Abigail loves every part of the publishing journey and considers herself lucky to be living out her dream every day. Visit her online at abigailowen.com.