A Few Good Fish (Fish Out of Water #3) (Paperback) 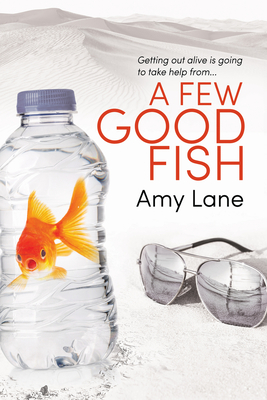 A Few Good Fish (Fish Out of Water #3) (Paperback)

This is book number 3 in the Fish Out of Water series.

Fish Out of Water: Book Three

A tomcat, a psychopath, and a psychic walk into the desert to rescue the men they love…. Can everybody make it out with their skin intact?

But their previous investigation poked a new danger with a stick, forcing Jackson and Ellery to leave town so they can meet the snake in its den.

Jackson Rivers grew up with the mean streets as a classroom and he learned a long time ago not to give a damn about his own life. But he gets a whole new education when the enemy takes Ellery. The man who pulled his shattered pieces from darkness and stitched them back together again is in trouble, and Jackson’s only chance to save him rests in the hands of fragile allies he barely knows.

It’s going to take a little bit of luck to get these Few Good Fish out alive!

Amy Lane is a mother of two grown kids, two half-grown kids, two small dogs, and half-a-clowder of cats. A compulsive knitter who writes because she can’t silence the voices in her head, she adores fur-babies, knitting socks, and hawt menz, and she dislikes moths, cat boxes, and knuckleheaded macspazzmatrons. She is rarely found cooking, cleaning, or doing domestic chores, but she has been known to knit up an emergency hat/blanket/pair of socks for any occasion whatsoever or sometimes for no reason at all. Her award-winning writing has three flavors: twisty-purple alternative universe, angsty-orange contemporary, and sunshine-yellow happy. By necessity, she has learned to type like the wind. She’s been married for twenty-five-plus years to her beloved Mate and still believes in Twu Wuv, with a capital Twu and a capital Wuv, and she doesn’t see any reason at all for that to change.
Website: www.greenshill.com
Blog: www.writerslane.blogspot.com
E-mail: amylane@greenshill.com
Facebook: www.facebook.com/amy.lane.167
Twitter: @amymaclane