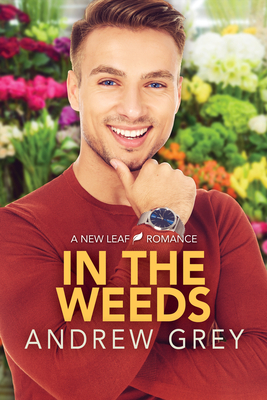 This is book number 2 in the New Leaf Romances series.

Florist to the stars Vin Robins is in high demand in LA, but he hates working for someone else. When he returns to his Pennsylvania home to help his widowed father, he finds an opportunity he never expected with his first love, but learns that someone’s been taking advantage of the unused family greenhouse.

Casey Lombard wasted too much of his life denying who he is and what he wants, but he won’t do that any longer. His biggest regret is letting Vin go, so running into Vin again when he gets called to investigate who planted pot on Vin’s family’s property sends him reeling.

Vin ignites feelings Casey thought long dead. But Casey has a daughter, and Vin is only home for a visit. Surely the bright lights of Hollywood will call him back to the City of Angels, so how can Vin and Casey build the life they both wish they had?
Andrew Grey is the author of more than one hundred works of Contemporary Gay Romantic fiction. After twenty-seven years in corporate America, he has now settled down in Central Pennsylvania with his husband of more than twenty-five years, Dominic, and his laptop. An interesting ménage. Andrew grew up in western Michigan with a father who loved to tell stories and a mother who loved to read them. Since then he has lived throughout the country and traveled throughout the world. He is a recipient ofthe RWA Centennial Award, has a master’s degree from the University of Wisconsin–Milwaukee, and now writes full-time. Andrew’s hobbies include collecting antiques, gardening, and leaving his dirty dishes anywhere but in the sink (particularly when writing). He considers himself blessed with an accepting family, fantastic friends, and the world’s most supportive and loving partner. Andrew currently lives in beautiful, historic Carlisle, Pennsylvania.