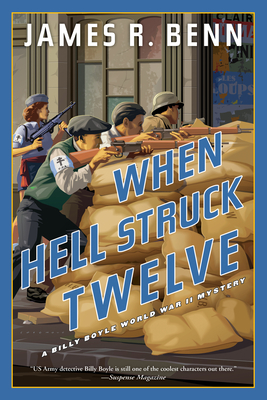 This is book number 14 in the A Billy Boyle WWII Mystery series.

August, 1944: US Army detective Billy Boyle is assigned to track down a French traitor, code-named Atlantik, who is delivering classified Allied plans to German leaders in occupied Paris. The Resistance is also hot on his trail and out for blood, after Atlantik’s previous betrayals led to the death of many of their members. But the plans Atlantik carries were leaked on purpose, a ruse devised to obscure the Allied army’s real intentions to bypass Paris in a race to the German border. Now Billy and Kaz are assigned to the Resistance with orders to not let them capture the traitor: the deception campaign is too important. Playing a delicate game, the chase must be close enough to spur the traitor on and visible enough to ensure the Germans trust Atlantik. The outcome of the war may well depend on it.
James R. Benn is the author of the Billy Boyle World War II mysteries. The debut, Billy Boyle, was selected as a Top Five book of the year by Book Sense and was a Dilys Award nominee, A Blind Goddess was longlisted for the IMPAC Dublin Literary Award, The Rest Is Silence was a Barry Award nominee, and The Devouring was a Macavity Award nominee. Benn, a former librarian, splits his time between the Gulf Coast of Florida and Connecticut with his wife, Deborah Mandel.
Praise for When Hell Struck Twelve

“An especially fine example of Benn’s long-running series . . . the emotional journey that is evoked by the talented Benn along the way is strong, vivid, and completely authentic. If you want to get a feel for what it might have been like for a Parisian in 1944 to finally be liberated from an oppressive rule, pick up this novel.”
—Mystery Scene Magazine

“Even after all this time U.S. Army detective Billy Boyle is still one of the coolest characters out there.”
—Suspense Magazine

“Fascinating characters and history-worthy plots...You won’t be able to put it down till the last page!”
—Eyes on World Cultures

“This consistently strong series has jumped to another level, with this volume clearly the hands-down best so far . . . a grandly suspenseful, old-school war story . . . Benn’s portrayal of the gallimaufry of competing Resistance groups, whose bullets, Billy learns, kill you just as dead as the Germans’ more powerful weaponry, adds a fascinating dimension to this exciting story of the sometimes-deadly chaos that accompanied the liberation of Paris.”
—Booklist, Starred Review

“Stellar . . . The author makes the most of the tense and dramatic backdrop to this high-stakes whodunit. Benn has surpassed himself with this installment.”
—Publisher's Weekly, Starred Review

“The action starts on the first page and doesn’t slow down.”
—Library Journal

“A World War II supersleuth slips into Paris to find a murderous French traitor . . . As usual, Benn packs this installment with historical detail and writes with authority and punch.”
—Kirkus Reviews

“Once I started this tension-filled mystery, I realized nothing short of a major catastrophe would stop me from reading it . . . With thorough research and authentic characters, James R. Benn always bring his stories to life for me.”
—RJ Julia Independent Booksellers (Madison, CT)

“[A] thrilling battle of wits between a dogged US investigator and cunning killer. Deft, gritty, and real as a howitzer blast."
—Andrew Gross, bestselling author of The One Man

“Benn's Billy Boyle mysteries are always entertaining . . . Benn's research is admirable and the expert way in which he uses this historical data to tell a riveting story is brilliant . . . Historical mysteries just don't get any better than this.”
—Seattle Post-Intelligencer

"Exceptional . . . Benn has never been better at integrating a whodunit plot line with a realistic depiction of life on or near the battlefield."
—Publishers Weekly, Starred Review