Sea Turtles to Sidewinders: A Guide to the Most Fascinating Reptiles and Amphibians of the West (Paperback) 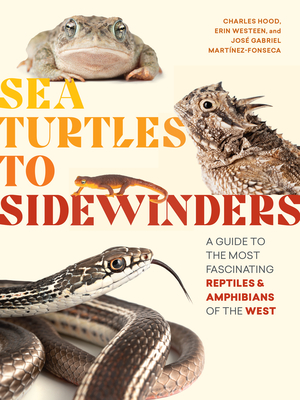 Sea Turtles to Sidewinders: A Guide to the Most Fascinating Reptiles and Amphibians of the West (Paperback)

"For families wanting to explore their local wildlife as well as an engaging read for those with a general interest in the subject.” —Booklist

The American West is home to a wide array of reptiles and amphibians-from the rare and curious to those that can be found in parks and backyards. With this user-friendly guide in hand, discover the most likely-to-be-encountered lizards, snakes, turtles, and amphibians native to Arizona, California, Idaho, Nevada, Oregon, Utah, and Washington, plus the western parts of Montana, Wyoming, Colorado, and New Mexico.

Whether you are a dedicated herper or simply have a keen interest in wildlife and natural history, Sea Turtles to Sidewinders—from Charles Hood, Erin Westeen, and Jose Gabriel Martfnez-Fonsec—will help you appreciate and celebrate the amazing diversity represented by reptiles and amphibians of the West.

Charles Hood grew up by the Los Angeles River, where at the age of 10 he saw his first snake. He has been a Fulbright scholar, a National Science Foundation Artist-in-Residence in Antarctica, and an author of Wild LA as well as two other nature guides. In his travels he has eaten mopani worms in Zambia and live ants in the Amazon before coming to live in the Mojave Desert, where he always has extra water in his car and at least one snake hook to scoot reptiles off midnight roads.
Born in the San Francisco Bay Area, biologist Erin Westeen has been fascinated with herps since first spotting western fence lizards in her childhood backyard. She has done extensive fieldwork across western North America and the Neotropics and is currently a PhD candidate at UC Berkeley, where she studies spiny lizards. When not in the field, you can find her in one of the many natural history museums where she has been lucky enough to work.
José Gabriel Martínez-Fonseca is a Nicaraguan biologist and wildlife photographer who has been working with amphibians, reptiles, and mammals for over 12 years. Fascinated by snakes long before he caught his first at the age of 11, he later co-authored a Field Guide to the Amphibians and Reptiles of Nicaragua. He is currently a PhD student at Northern Arizona University, where he studies habitat fragmentation in the Neotropics and enjoys photographing as many species of amphibians and reptiles as possible.