The Rescue Effect: The Key to Saving Life on Earth (Hardcover) 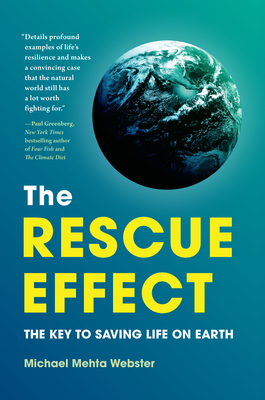 The Rescue Effect: The Key to Saving Life on Earth (Hardcover)


Available at One of Our Locations
“Details profound examples of life’s resilience and makes a convincing case that the natural world still has a lot worth fighting for.” —Paul Greenberg, New York Times bestselling author of Four Fish and The Climate Diet

As climate change continues to intensify, the outlook for life on Earth often seems bleak. Yet hope for the future can be found in the “rescue effect,” which is nature’s innate ability to help organisms persist during hard times. Like a thermostat starting the air conditioning when a room gets too warm, the rescue effect automatically kicks in when organisms are stressed or declining.

In The Rescue Effect, Michael Mehta Webster reveals the science behind nature’s inherent resilience, through compelling stories of species that are adapting to the changing world—including tigers in the jungles of India, cichlid fish in the great lakes of Africa, and corals in the Caribbean. In some cases, like the mountain pygmy-possum in the snowy mountains of southeast Australia, we risk losing species without intensive help from people. As observers to—and the cause of—species declines, we must choose whether and how to help, while navigating challenging questions about emerging technologies and the ethics of conservation actions.

Ultimately, Webster argues that there are good reasons to expect a bright future, because everywhere we look, we can see evidence that nature can rescue many species from extinction; and when nature alone is not up to the task, we can help. Combining rigorous research with gripping storytelling, The Rescue Effect provides the cautious optimism we need to help save life on Earth.

Michael Mehta Webster is an expert in ecology, conservation, philanthropy, and non-profit management. His research interests focus on how organisms and ecosystems adapt to environmental change, how this information can be translated into effective conservation strategies, and the practical and ethical dilemmas that arise along the way. As an executive director of a conservation organization, program officer at a leading environmental foundation, and academic scientist, he has led efforts to connect cutting edge science to the management of species and ecosystems in the wild.
“Details profound examples of life’s resilience and makes a convincing case that the natural world still has a lot worth fighting for.” —Paul Greenberg, New York Times bestselling author of Four Fish and The Climate Diet

“We are often told that nature is a fragile thing, being snuffed out by humans. Get real. Destructive as humans are, nature is smarter, more resilient, ever able to adapt and evolve. Michael Mehta Webster’s masterful The Rescue Effect shows how.” —Fred Pearce, author of The New Wild

“In the face of continuing biological change, what should we do? In The Rescue Effect, Webster argues that we should help nature to help itself. This realistic, positive, and optimistic approach embraces biological change and appreciates biological novelty, rather than dwelling forever in imaginations of a rose-tinted past—sign me up for a more positive future!” —Professor Chris D. Thomas, author of Inheritors of the Earth

“Webster’s piercing intelligence and long experience in the field has given us a new lens with which to frame conservation.  His perspectives will be counterintuitive for some, but also give reason for guarded optimism in a planet undergoing accelerating change.” —Charles Conn, co-author of Bulletproof Problem Solving

“The Rescue Effect is both a whirlwind tour of conservation issues from around the world and an ecologist’s insights into how biodiversity on earth could survive a range of human impacts, the most important being climate change.”—Ray Hilborn, co-author of Ocean Recovery

“A riveting exploration of nature and the tough choices facing people about the future of life on Earth. Ultimately, The Rescue Effect illustrates why we should take heart in our knowledge that nature can rescue life from extinction—if we give it a chance. It is a bold challenge to the way we have approached conservation of biodiversity.” —Daniel Schinder, professor at the School of Aquatic and Fishery Sciences at the University of Washington

“Is mass extinction inevitable? Webster confronts that question by exploring the many ways in which plants and animals can be rescued or—it turns out—rescue themselves from human dominance. An uplifting and engaging book pointing to ecology and evolutionary biology as a foundation for guiding conservation efforts.” —Clifford Kraft, professor at the Department of Natural Resources and the Environment at Cornell University

“The Rescue Effect is an antidote to the paralyzing sense of helplessness that can overwhelm us when we face up to the stark realities of the interlinked biodiversity and climate crises. It offers a hopeful reminder of nature’s powerful capacity to adapt, but also forces us to take ownership of the increasingly uncomfortable choices we may need to make as we continue to push nature toward the limits of what it can do on its own.” —Aileen Lee, chief program officer, Environmental Conservation, at the Gordon and Betty Moore Foundation