It Jes' Happened: When Bill Traylor Started to Draw (Paperback) 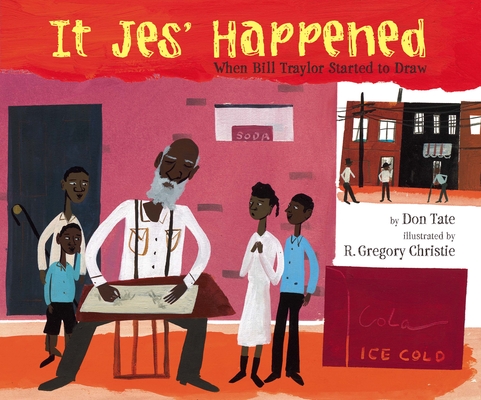 It Jes' Happened: When Bill Traylor Started to Draw (Paperback)

The inspiring biography of self-taught (outsider) artist Bill Traylor, a former slave who at the age of eighty-five began to draw pictures based on his memories and observations of rural and urban life in Alabama.

Growing up as an enslaved boy on an Alabama cotton farm, Bill Traylor worked all day in the hot fields. When slavery ended, Bill's family stayed on the farm as sharecroppers. There Bill grew to manhood, raised his own family, and cared for the land and his animals.

By 1935 Bill was eighty-one and all alone on his farm. So he packed his bag and moved to Montgomery, the capital of Alabama. Lonely and poor, he wandered the busy downtown streets. But deep within himself Bill had a reservoir of memories of working and living on the land, and soon those memories blossomed into pictures. Bill began to draw people, places, and animals from his earlier life, as well as scenes of the city around him.

Today Bill Traylor is considered to be one of the most important self-taught American folk artists. Winner of Lee & Low's New Voices Award Honor, It Jes' Happened is a lively tribute to this man who has enriched the world with more than twelve hundred warm, energetic, and often humorous pictures.

Don Tate is an award-winning author, and the illustrator of numerous critically acclaimed books for children. He is the recipient of the Ezra Jack Keats Book Award and the Carter G. Woodson Book Award. Tate and his family live in Austin, Texas. You can visit him online at dontate.com and follow him on social media at @devas_T. R. Gregory Christie is the recipient of numerous awards including a Caldecott Honor and six Coretta Scott King Illustrator Award Honors, and his books have been recognized by The New York Times Best Illustrated Children's Books list three times. He currently paints in the evenings while traveling around the country doing school visits. You can visit him online at gas-art.com.