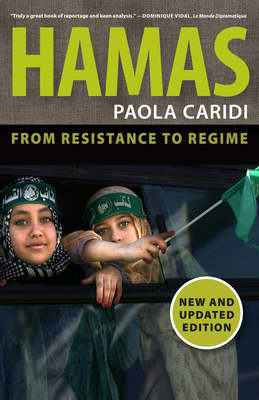 
Coming Soon - Available for Preorder Now
When the radical Islamist group Hamas was elected to lead Palestine in 2006, the Western world was shocked. How had the majority of Palestinians come to support an extremist organization and how would the group’s new political power affect the larger Israel/Palestine conflict?

Italian journalist and historian Paola Caridi offers a clear-eyed account of how the conditions in this war-torn region led to the rise of Hamas and an unbiased look at the complex feelings that Palestinians have toward getting behind a government that supports violent resistance. By breaking from the sensationalist journalism surrounding the elections, Caridi is able to tell the story of a movement caught between the desire to resist its oppressor and the need to provide support for a refugee people. Caridi, informed by years of on-the-ground research and interviews with residents of Gaza and leaders of Hamas, covers the history of Gaza from its golden age as a port city to the formal birth and slow militarization of Hamas. This English-language translation brings the reader to present-day Palestine by offering a never-before-seen chapter on Operation Cast Lead, the shocking WikiLeaks disclosures, and the Cairo Revolution.

Hamas paints a picture, with intelligence, dexterity, and heart, of a people trapped in the most historic of political battles and reveals the strange complexities behind the controversy by explaining one of the key players in the search for peace and justice that runs through the central crisis of the Middle East today.
Journalist and historian PAOLA CARIDI has lived in the Middle East since 2001. She contributed to the founding of the press agency Lettera22 and has worked with L'Espresso, Sole 24 Ore, La Stampa, and FamigliaCristiana. Hamas: From Resistance To Government, her second book, was published in Italy in 2009 and in Palestine in March 2010.

ANDREA TETI is a Lecturer in International Relations at the University of Aberdeen and Senior Fellow at the European Center for International Affairs. His research focuses on Middle Eastern politics, political theory, and the history of social science.
“In this capable, evenhanded work of research, proficiently translated from the Italian, journalist and historian Caridi carefully tracks the founding of Hamas from its offshoot of the Muslim Brotherhood to its West-defining period of terrorism to its eventual, effectual embrace of political representation since 2006...an intriguing study of Hamas’ tortuous movement from “pebbles to power…from terrorist attacks to ministries.” —Kirkus Reviews

“Hamas is hardly an unfamiliar actor on the world stage. But much of the discussion about Hamas is more heated than enlightening.  Paola Caridi's book is thus a real treat: it starts not with the controversy but with the movement itself, working from the ground up. interviewing those inside and outside the movement, and poring through written sources. The book explores Hamas's origins, evolution, and choices.  Those who are already familiar with Hamas will find new information presented in a careful and judicious manner; those who know less about Hamas will find an accessible and rewarding account of the movement.” —Nathan J. Brown, Professor of Political Science and International Affairs, George Washington University

“Paola Caridi, Italian journalist and historian, exploits her mastery of the pen and eye for historical detail to provide a rich, balanced view of the Palestinians’ leading Islamist organization—Hamas. Skillfully translated by Andrea Teti, Caridi’s book draws heavily upon extensive interviews with Palestinian elites and regular citizens to chart Hamas’s rise to popularity and power. A superb addition to the literature on the Palestinians.” —Kirk J. Beattie, Simmons College, Boston