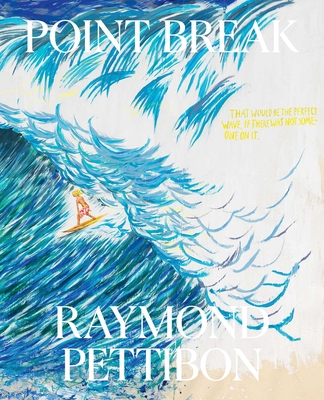 
Ships to Our Store in 1-5 Days
“All this must be either surfed or painted”: This is the underlying sentiment behind Raymond Pettibon’s iconic works of surfers and waves in this quintessential volume dedicated to the motif.

Pettibon is known for his characteristically enigmatic aesthetic and sharply satirical critiques of American culture. Though drenched in cynicism, his work empathizes with the dizzying madness of our own humanity as it engages both so-called high and low culture. Perhaps most poetic among the many motifs present in Pettibon’s oeuvre is the surfer. In 1985, Pettibon began his series of surfers and waves––which he continues to work on to this day––popular for depicting a lone surfer silently carving “a line of beauty” along an impossibly large wave.

This book spotlights a selection of more than one hundred surfers from the series, from smaller monochromatic works on paper to colorful large-scale paintings applied directly to the wall. For Pettibon’s protagonist in these works, surfing exists apart from all else. Momentarily he achieves sublimity on the wave, distant yet synced with turbulent reality. We are forced to confront our own scale: small and feeble in the face of the power of nature, what is beyond our control. Pettibon’s lyrical writings on these painted surfaces—both his own and lines taken from literature—reference his own philosophies and the confusions of reality: he critiques and highlights the hypocrisies and vanities of the world he engages. To help navigate, the scholar Brian Lukacher explores art-historical antecedents in Pettibon’s work, particularly the seascapes of J. M. W. Turner, and Jamie Brisick, the writer and former professional surfer, examines the Southern California surf and music culture of Pettibon’s youth. Professional big wave surfers Emi Erickson and Stephanie Gilmore also describe the sensory experience of conquering the enormous waves depicted in Pettibon’s works.
Raymond Pettibon’s (b. 1957) influential oeuvre engages a wide spectrum of American iconography variously pulled from literature, art history, philosophy, religion, politics, sports, and alternative youth culture, among other sources. Intermixing image and text, his drawings engage the visual rhetorics of pop and commercial culture while incorporating language from mass media as well as classic texts by writers such as William Blake, Marcel Proust, John Ruskin, and Walt Whitman. Through his exploration of the visual and critical potential of drawing, Pettibon’s practice harkens back to the traditions of satire and social critique in the work of eighteenth- and nineteenth-century artists and caricaturists such as William Hogarth, Gustave Doré, and Honoré Daumier, while reinforcing the importance of the medium within contemporary art and culture today.

Former professional surfer Jamie Brisick is a writer and photographer whose work has appeared in The Surfer’s Journal, The New Yorker, The New York Times, and The Guardian.

Brian Lukacher is a professor of art history at Vassar College.

Undoubtedly one of the world’s most stylish surfers, Stephanie Gilmore entered the professional surfing scene in 2007, winning four of the eight events and claiming the WSL world title in her rookie year. She has dominated ever since, winning seven world titles so far. Stephanie spends her days away from the tour traveling the globe, exploring new waves, cities and beaches, photographing her adventures, and playing her many guitars. Stephanie led the World Surf League (WSL) to achieve gender pay equality, one of the first international sporting organizations to do so. She’s an advocate for ocean health and loves to spend time with the next generation of surfers at initiatives such as Rising Tides at WSL tour events. In July 2021, Stephanie represented Australia and surfing for its debut appearance in the Tokyo Olympic Games.

Emily Erickson is a second-generation big-wave surfer from the North Shore of Oahu. Her father, Roger, is a renowned big-wave pioneer and former North Shore lifeguard. Emily has forged a reputation for riding a variety of equipment on a variety of waves. She’s best known, however, for riding beautiful, hand-crafted single fins. She has chased swells all over the world, but is notorious for surfing her home breaks of Sunset Beach and Waimea Bay. Emily helped create history in 2019 as one of the first-ever female invitees to the prestigious Eddie Aikau Big Wave Invitational at Waimea Bay. She is winner of the 2019 Nelscott Reef Pro, a three-time finalist in the Women’s Big Wave invitational at Peahi Jaws, and a three-time XXL Awards Women’s Performer of the Year nominee. Competition has never been her focus, though. Emily simply loves being in the ocean.
"Perhaps no subject better captures the spirit of Mr. Pettibon’s drawings than that of surfers dwarfed by towering waves."
— Nancy Princenthal

“This volume brings together a host of reflections on the smallness and feebleness of humans in the face of the grandiosity of mother nature—an element entirely beyond our realm of control.”
— Flaunt Magazine

"Pettibon’s surfers can muster a whirlwind of emotions within the viewer. They “express the terror and bliss of being alive,” said The Skateroom founder, Charles-Antoine Bodson, on a recent partnership with the artist."
— Hypebeast

"For most certainly we have discovered the most aesthetically-pleasing book released this June.”
— Refreads