Painting from the Palette of Love: The Mystical Poetry of Kabir (Paperback) 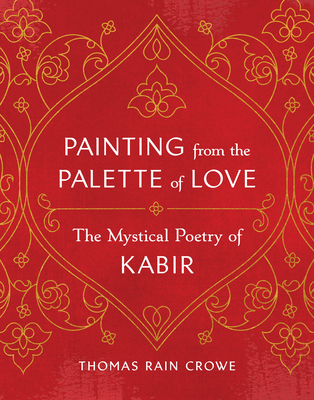 Painting from the Palette of Love: The Mystical Poetry of Kabir (Paperback)


Coming Soon - Available for Preorder Now
Wrap yourself in the boundless love of the Divine with  the mystical poetry of renowned Sufi saint Kabir, here brought to life for modern readers by acclaimed poet Thomas Rain Crowe​.

“When you’ve come all this way to the ocean of happiness,
Do not return home thirsty with an empty cup.
Wake up! Here is some pure water,
Drink as much as you can!”

The enigmatic Indian mystical poet Kabir stands among the greatest spiritual thinkers of human history. At once a Sufi, Hindu, and unbounded disciple of the universal Divine, Kabir and his songs of union and ecstasy lead us beyond our preconceived biases about truth and reality—and invite us to see our life, through his eyes, as an ego-shattering and incomparably joyful dance with the Beloved.

This 65-poem collection of Kabir’s most rapturous spiritual songs, rendered into modern language by acclaimed poet and Sufi performing artist Thomas Rain Crowe, is brought to life in fresh, evocative language bursting with mystical power. As striking and profound now as when they were originally composed in fifteenth-century India, these poems offer a sumptuous taste of true reality—beyond boundaries of religion and culture, beyond divisions of self and other, and in joyful embrace of life and our world.
THOMAS RAIN CROWE is an internationally published and recognized author of more than thirty books, including the multi-award winning nature memoir Zoro’s Field: My Life in the Appalachian Woods and numerous collections of poetry, including Learning to Dance, The Laugharne Poems, and modern renditions of the poetry of the Sufi mystic poet Hafiz (In Wineseller’s Street; Drunk on the Wine of the Beloved). The founder and publisher of New Native Press, a small literary press started in 1979, he lives in the Tuckasegee watershed of North Carolina.