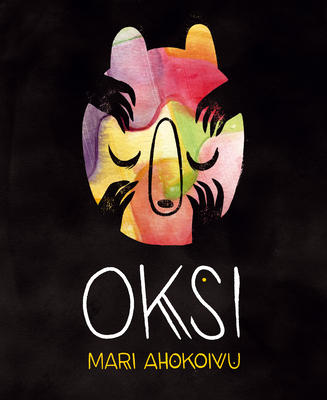 "It's a fairytale nightmare of the highest quality, a heartfelt history lesson written in flames, a poem."—Comics Beat

★ "At once beautiful and creepy...a fusion of fantasy and folklore that is more fine art than comic book. A must for libraries with folklore and world culture collections."—School Library Connection (starred)

★ "Fluidly rendered in inky b&w washes; accents of color leap off the page as the translation by Aronpuro flows smoothly."—Publishers Weekly (starred)

★ "Painful yet unforgettable. [this] Finnish fairy tale sees the damage that gods, mothers, and daughters are willing to inflict upon one another, all under the guise of love."—Booklist (starred)

★ "Rich. Radiant. Arresting. A breathtaking exploration of generational connection and the ways that damage can pass down from mother to daughter as easily as love."—BCCB (starred)

Where was the bear born?
Where delivered?
By the moon, next to the sun
Among the stars of the plough
Sent to Earth in a golden cradle
With silvery chains.

Poorling is a little bear. She's a bit different from her brothers.

Mother keeps their family safe. For the Forest is full of dangers. It is there that Mana lives, with her Shadow children.

And above them all, Emuu, the great Grandma in the Sky.

From the heart of Finnish folklore comes a breathtaking tale of mothers, daughters, stars and legends, and the old gods and the new.
Mari Ahokoivu is an illustrator and comics artist from Finland. Her magnum opus, Oksi, was called "beautiful, clever, funny, vibrant, and full of magic" by the biggest newspaper in her home country; was shortlisted for the Jarkko Laine Award; and has now been translated into English as the first graphic novel on the Levine Querido list.

Silja-Maaria Aronpuro is a Finnish translator. She finds bringing other people's stories to life in a different language pretty magical. She is happy to have translated books that have been selected the Finnish graphic novel of the year 2018 and the translation of the year 2019 by the panel of critics in the Finnish comics society's magazine.
“It’s a fairytale nightmare of the highest quality, a heartfelt history lesson written in flames, a poem.”-Comics Beat,


[STAR] “Painful yet unforgettable… [this] Finnish fairy tale sees the damage that gods, mothers, and daughters are willing to inflict upon one another, all under the guise of love.”-Booklist (starred),


“A haunting but playful feast for the eyes. Oksi interprets an age-old story with inimitable vision and grace.” -Foreword Reviews

[STAR] "A must for libraries with folklore and world culture collections."-School Library Connection (starred),


“Dark, complex, and gratifying. With its ethereal fairy-tale quality, this quietly challenging story of parents and children translated from the original Finnish is visually powerful and emotionally compelling.” -Kirkus Reviews,


[STAR] “Rich. Radiant. Arresting. A breathtaking exploration of generational connection and the ways that damage can pass down from mother to daughter as easily as love.”- Bulletin of the Center for Children's Books (starred),


“Originally published in 2018 in Finnish, this newly translated graphic novel mixed science-fiction, fantasy, and Finnish mythology. The story follows a mother bear protecting her children and adopted creature, while the deities in the sky watch over them. A peek at these lush and emotive illustrations, has us very excited to read this book.”-The Mary Sue,


"This painful yet unforgettable Finnish fairy tale explores the damage that gods, mothers, and daughters are willing to inflict upon one another under the guise of love. Negative space emphasizes solitude and desolation through inky backgrounds and white, tree-shaped gaps between panels." - Booklist

"This graphic novel adaptation of a translated Finnish folktale is a breathtaking exploration of generational connection and trauma, following the story of a mother bear, her cubs, and a magical girl with no clear family. Radiant, ethereal digital art accompanies the subtle storytelling to create a truly exceptional offering." - Bulletin of the Center for Children's Books,


"This Finnish book (translated by Silja-Maaria Aronpuro) was also a surprise, more Angela Carter than Emily Carroll, a dark fairy tale about the violence of love and family, rendered in inky watercolors with color that stands out like inlay. Mari Ahokoivu is one to watch for the future for sure, an artist who’s unafraid to wade into a frozen swamp of mud and blood and fire and show how beauty and danger can coexist." - The Comics Journal,


"There’s something Promethean at work here, with humans receiving the gift of fire only to turn it to violence, and Ahokoivu renders that flickering, fascinating substance repeatedly with an awareness of its transformative power. It might as well be the life force of the critters we create, who will build a new world that we didn’t anticipate. The book keeps slipping through my mental fingers when I try to grab it tightly and look at its pieces, but I think that’s a strength and not a weakness. Its ability to create an atmosphere and strong emotional ripples that stay with us is impressive.” - The Comics Journal,