Hope in Hell: How We Can Confront the Climate Crisis & Save the Earth (Hardcover) 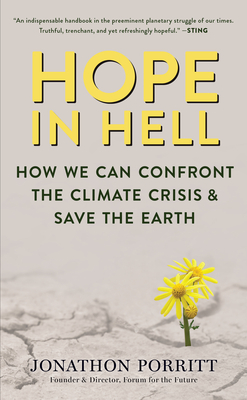 Climate change is our era's defining issue. We know, beyond reasonable doubt, that climate change is accelerating. To face a challenge greater than humanity has ever seen before, we must also accelerate ourselves, by summoning a sense of urgency, courage, and shared effort to match it. Jonathan Porritt's Hope In Hell is meant to do just that, by confronting the issue directly and strongly, but also with inspiration and hope; it's not too late to avoid the worst consequences of climate change. Ultimately optimistic despite the dire challenge presented to the world, Porritt explores current science and new technologies, mobilization of younger people and political action, and encouraging intergenerational solidarity as older generations learn their own responsibilities in creating a better world for their successors.

In addition, Jonathon is President of Population Matters, President of The Conservation Volunteers and a Director of Collectively (an online platform celebrating sustainable innovation). He was formerly Director of Friends of the Earth (1984-90), co-chair of the Green Party (1980-83), of which he is still a member, a Trustee of World Wildlife Fund UK (1991-2005) and between 2000-2009 he was Chair of the UK Sustainable Development Commission, providing high-level advice to Government Ministers.

Jonathon was installed as the Chancellor of Keele University in February 2012 and he received a CBE in January 2000 for services to environmental protection.