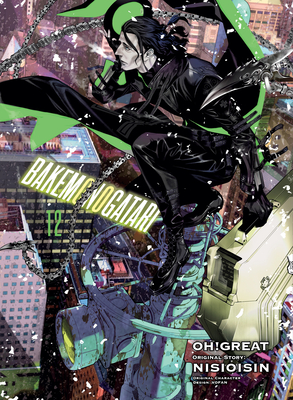 This is book number 12 in the Bakemonogatari (manga) series.

"Newcomers and existing fans alike will enjoy diving into the world of Monogatari and meeting the delightful cast of characters. If you're yet to experience this series in any form then this is the perfect time to climb aboard!"
- Anime UK News

Koyomi confronts his final foe, Guillotine Cutter. It’s former-human-turned-vampire vs. the human vampire-hunter cult leader. But Koyomi hears that Hanekawa is being held hostage, and to save her, he’ll have to push his new powers to the limit.

Is Koyomi willing to lose his humanity before he can regain it?
Born in 1981, NISIOISIN dropped out of Ritsumeikan University in Kyoto, to pursue a career in story-telling. Initially he had ambitions to be a comic artist, but he began to focus on his writing, eventually winning the 23rd Mephisto Prize, for Kubikiri Cycle (Del Rey) recognizing his talents as a mystery writer, at the age of 20. Since his debut in 2002 Nisio has penned more than 50 novels and a number of comics. And he has quickly become one of Japan's top selling author's in recent memory with more than 5 million units sold since 2009.