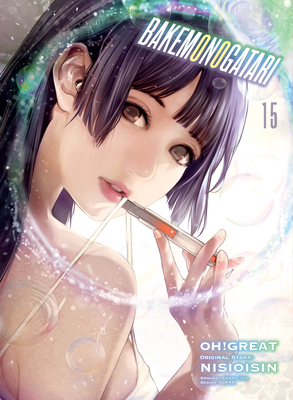 This is book number 15 in the Bakemonogatari (manga) series.

"Newcomers and existing fans alike will enjoy diving into the world of Monogatari and meeting the delightful cast of characters. If you're yet to experience this series in any form then this is the perfect time to climb aboard!"
- Anime UK News

After learning the truth behind Kiss-Shot’s actions, Koyomi is left with a hard decision to make. Now, he has to weigh the fate of humanity against the sacrifice of his former master, but how can he do the right thing when there are seemingly no good outcomes to be had?
Born in 1981, NISIOISIN dropped out of Ritsumeikan University in Kyoto, to pursue a career in story-telling. Initially he had ambitions to be a comic artist, but he began to focus on his writing, eventually winning the 23rd Mephisto Prize, for Kubikiri Cycle (Del Rey) recognizing his talents as a mystery writer, at the age of 20. Since his debut in 2002 Nisio has penned more than 50 novels and a number of comics. And he has quickly become one of Japan's top selling author's in recent memory with more than 5 million units sold since 2009.