Ronald Reagan Was A Badass: Crazy But True Stories About The United States' 40th President (Paperback) 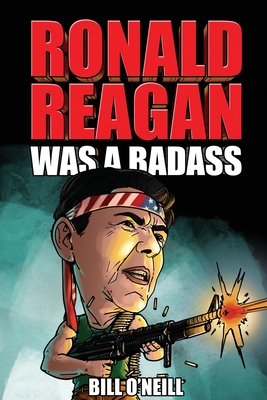 Ronald Reagan Was A Badass: Crazy But True Stories About The United States' 40th President (Paperback)

American history is full of many badasses who weren't afraid to blaze new trails, often placing themselves in great danger in process.

Along with a host of trailblazing pioneers, scientists, entrepreneurs, activists, soldiers, and athletes, the United States has had some incredibly badass presidents who have embodied the rough and tough American spirit.

Unlike many of the countless biographies that have been written about Reagan, this book takes a lighthearted approach to what made "Ronnie" such a badass, beginning with his Hollywood acting career and ending with him riding off into the sunset with Nancy.

In Ronald Reagan Was a Badass Crazy But True Stories About The United States' 40th President, you'll learn about how some of the following events, people, and ideas contributed to making Reagan a truly badass president and be able to answer the following questions:

- How did Reagan prosper in Hollywood and use that career to his advantage despite often getting lackluster and at least one very silly role?

- Why was such a staunch anti-communist and how did that effect his worldview?

- How did Reagan become such a badass public speaker?

- When did Reagan face failure and how did he rise above that?

- Who were Reagan's badass allies in his worldwide crusade against communism?

- How did Reagan survive an assassination attempt?

- When did Reagan put forward his economic ideas and how did they make the 1980s a badass decade?

- How did Reagan win the Cold War?

And so much more

This book is chalked full of fascinating and inspiring facts and anecdotes about arguably the most important American president since World War II.

Far more than just another boring history book, this down-to-Earth read (just as Reagan would've wanted it) is guaranteed to keep you reading page after page.