History That Has Not Been Told: The Cultural Experience of African Americans in America (Hardcover) 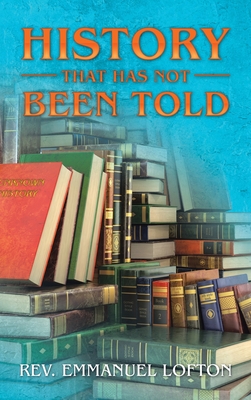 History That Has Not Been Told: The Cultural Experience of African Americans in America (Hardcover)


Ships to Our Store in 1-5 Days
The book is designed to bring about an awareness of the cultural attributes of African Americans that was excluded from history as taught in the public school systems. Its purpose is to enlighten the reader of the struggles of African Americans in the United States. Although slavery had been legally abolished, the new codes and laws of discrimination made it difficult for Blacks to gain equality and parity in this country. Yet, through the decades, there have been those who were driven by a deep sense of purpose and committed to the goal to transform the oppressor, uplift the oppressed and restore human dignity. The book highlights some of the individuals who gave of their time, blood, sweat, tears and talents to make these United States better for everyone regardless of race, creed or color.
Reverend Emmanuel Lofton was born into a sharecropper's family in Coahoma County, Mississippi in 1932. At age 11, he and his family moved to Crawfordsville, Arkansas where he completed his elementary and high school education. He enrolled in college but was called to serve in the U.S. Army during the Korean War. After serving his country, her returned to Arkansas and completed his education at the University of Arkansas at Pine Bluff receiving his Bachelor's degree in Sociology. he located to Blytheville, Arkansas and established himself as an Educator, political and Civil Rights Activist, Community Leader, Theologian and "Bridge Builder." he was elected to the Mississippi County Quorum Court County Commission(justice of the peace) and ultimately became the first African American male to run for mayor of the city of Blytheville. he as received numerous civic recognitions and awards such as the Blytheville Chamber of Commerce Life time Achievement Award, the 2020 MLK achievement Award and Honary Recognition from Alpha Phi Alpha. Emmanuel is an avid believer in education and information as a means to elevate oneself from circumstances of poverty and social ideas of racial deficiencies.