smART: Use Your Eyes to Boost Your Brain (Adapted from the New York Times bestseller Visual Intelligence) (Hardcover) 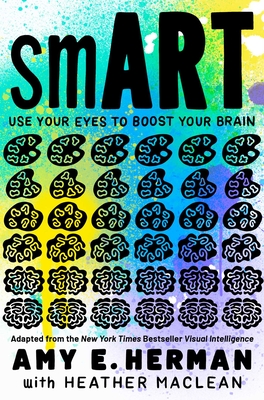 smART: Use Your Eyes to Boost Your Brain (Adapted from the New York Times bestseller Visual Intelligence) (Hardcover)


Available at One of Our Locations
I Spy and Where’s Waldo? get a revolutionary twist in this self-directed, interactive book that teaches young readers how to fully engage their brains to think critically and creatively.

What would you say if I told you that looking at art could give you the confidence you need to speak up in class? Or that learning the history of donuts could help you think like a super spy and train like the CIA?

smART teaches readers how to process information using paintings, sculptures, and photographs that instantly translates to real world situations and is also fun!

With three simple steps (1) How to SEE, (2) How to THINK about what you see, and (3) How to TALK about what you see, readers learn how to think critically and creatively, a skill that only requires you to open your eyes and actively engage your brain.
Amy E. Herman is the New York Times bestselling author of Visual Intelligence, the written companion of the program Herman has used for eighteen years to provide leadership training to the FBI, Navy SEALs, NATO, the Peace Corps, Georgetown University Hospital, and executives at Microsoft and Google. The method has helped companies save millions of dollars, solve crimes, and even save lives, and the book has been translated into nine different languages, teaching readers how to sharpen their observation, perception, and communication skills using art. Herman, a self-proclaimed “recovering lawyer,” was also the Director of Educational Development at Thirteen/WNET and the Head of Education at The Frick Collection for over ten years. To learn more about Amy Herman, you can visit her website ArtfulPerception.com.

Heather Maclean is a Princeton graduate and the New York Times bestselling author and editor of fifteen books. Named one of the “16 Best Entrepreneurs in America” by Sir Richard Branson, she accompanied the adventurous business legend on a 50,000-mile trip around the world, alternately helping improve the lives of others (designing sustainable development initiatives in South Africa) and fearing for her own life (rappelling out of a Black Hawk helicopter in a Moroccan sandstorm). Heather began her career at Disney, where she had the distinction of being the first person ever to answer Mickey Mouse’s email. When not castle hunting in her husband’s native Scotland, she and her clan of three kids happily reside in Michigan.
* Written in a conversational tone and full of journal-style prompts...this is a book to be revisited again and again. At each stage, readers are encouraged to become more aware of their initial assumptions and perceptions and the ways those reactions may be skewed or flawed, gently touching on unintentional but automatic biases and judgments. The thorough discussion of clearer, more effective communication transfers to many contexts, and Herman’s note to adult readers sets the stage for use of this book as a whole-family learning experience.