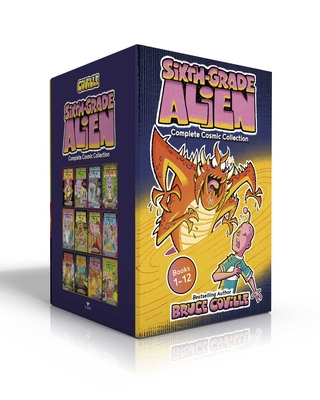 Fellow sixth graders, an alien and a human, become unlikely friends in this hilarious, fast-paced, and accessible sci-fi series from the bestselling author of Aliens Ate My Homework, Bruce Coville—now all together in a collectible paperback boxed set!

When Pleskit Meenom becomes the first alien to go to school on earth, not everyone is happy about it. But when he becomes best friends with Tim Tompkins, life gets a little easier. Together, Tim and Pleskit navigate earthly and intergalactic adventures from school bullies and rogue aliens to shrinking rays gone wrong and alien abductions.

This intergalactically fun collection includes:
Sixth-Grade Alien
I Shrank My Teacher
Missing—One Brain!
Lunch Swap Disaster
Zombies of the Science Fair
Class Pet Catastrophe
Too Many Aliens
Snatched from Earth
There’s an Alien in My Backpack
The Revolt of the Miniature Mutants
Aliens, Underwear, and Monsters
Farewell to Earth
Bruce Coville has published more than one hundred books, which have sold more than sixteen million copies. Among his most popular titles are My Teacher Is an Alien, Into the Land of the Unicorns, and The Monster’s Ring. Bruce also founded Full Cast Audio, a company that creates recordings of the best in children’s and young adult literature. He lives in Syracuse, New York, with his wife, Katherine. Visit him at BruceCoville.com.