The Devil and Dr. Fauci: The Many Faces of Bureaucratic Evil (Hardcover) 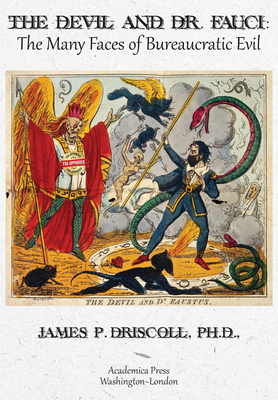 The Devil and Dr. Fauci: The Many Faces of Bureaucratic Evil (Hardcover)

The Devil and Dr. Fauci is an unsparing critique of what author James Driscoll calls the "Drug Testing, Licensing, and Marketing Complex," or DTLM. Quietly dominating America's healthcare industry, the DTLM poses threats comparable in magnitude, if not in character, to those of the Military-Industrial Complex. With a satiric scalpel reminiscent of Jonathan Swift's, Driscoll eviscerates the DTLM's avatar Dr. Anthony Fauci, our age's version of the archetypal Dr. Faustus. He exposes Fauci's pivotal position in the DTLM, at whose core is the U.S. Food and Drug Administration. The FDA, Driscoll asserts, has long played Mephistopheles to Fauci's Faustus, with grave consequences for American healthcare. Dr. Driscoll's book is the first to upbraid the DTLM, FDA, and Fauci for exacerbating the Covid-19 crisis. Seeking to maximize profits from patentable vaccines, they rigorously suppressed off patent prophylaxis and treatment alternatives. This was but one of many DTLM follies that raised Covid's death toll and increased its socio-economic devastation. Other prominent follies were the mask posturing, arbitrary lockdowns, and closing of churches and schools that the DTLM and its political allies used to distract from their sacrifice of public health to their own agendas. We may never know if the Chinese deliberately released the Covid-19 virus, or if they created it. Yet the world now knows the destructive potential of gain of function technology. Similar epidemics or worse will strike us. To survive next time, we will need radical reforms in the FDA and transparency for the DTLM. But the opaque FDA bureaucracy, Driscoll concludes, is only one instance in our greater problem of deficient oversight within all of our increasingly powerful and ever less accountable federal bureaucracies.

James P. Driscoll, Ph.D., is a longtime AIDS and FDA reform activist who in 1995 led the drive to secure early FDA approval for the drug cocktails that changed AIDS from a death sentence to a manageable condition. That approval, three years before FDA wanted, saved more than 86,000 lives in the US. Driscoll is the author of scores of articles and seven books, including How AIDS Activists Challenged America, a history of his work as an AIDS and FDA reform activist.