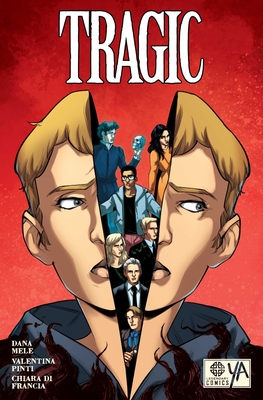 
Ships to Our Store in 1-5 Days
“IT STARTS WITH A DEATH IN THE FAMILY.”

She’s convinced his mysterious and tragic death is not an accident and is determined to find out who is responsible. Suspect number one: her uncle, who has been having an affair with her mother.

Harper enlists the help of her ex-girlfriend Talia and her best friend (sometimes with benefits) Holden to prove her uncle’s guilt. But when her father’s business partner is also found dead, Harper realizes finding the murderer is more complicated than she had thought.

As Harper starts hallucinating about her dad’s death and begins to see his ghost as a teenage Hamlet everywhere she turns, one thing becomes clear – in order to uncover the truth, Harper must confront the demons that have haunted her family for decades.

Legendary Comics YA proudly presents this bold retelling of Shakespeare’s Hamlet from a queer lens written by Dana Mele (People Like Us, Summer’s Edge) with art by Valentina Pinti.
Dana Mele is a Pushcart Prize–nominated writer based in upstate New York. A former bookseller and lover of pomegranates, Dana is the author of the YA thrillers People Like Us and Summer’s Edge. Tragic is Dana’s debut graphic novel. Follow Dana on Twitter at @danamelebooks and Instagram at @danammele.

Valentina is an Italian comic book artist and illustrator who studied in Italy at N.I.D. (New Istitute of Design) and the Academy of Fine Art in Perugia. She started publishing in 2013 and since then she has worked with a big number of Italian publishers. She has also collaborated with publishers such as Petit-à-Petit in France, South East Comics in Holland, Space Between Entertainment, BOOM!Studios and ScoutComics in the U.S., and Rebellion Comics in England. At the moment, apart from collaborating with Legendary Comics, she is hard at work with France's Editions Soleil.

Chiara Di Francia (1984 – Turin, Italy) has been working as an illustrator and comic artist since 2010. She illustrated books for Hachette Livre, Sigil Entertainment Group, Yil Editions. In 2020, she drew a volume of the “Mary Shelley Presents” series (Kymera Press), which won a Bram Stoker Award for Superior Achievement in a Graphic Novel. Since 2018, she has been collaborating with Arancia Studio as an illustrator and color artist, working for the French market (Jungle, Dupuis, Les Humanoïdes Associés and many more), then landing on the US market. She’s currently coloring “Red Sonja by Mirka Andolfo” and “Red Sitha” (Dynamite Entertainment).
"Exceptional characters elevate an absorbing, often eerie murder mystery."
— Kirkus Reviews

"A unique and compelling whodunnit that makes you want to scour each frame for clues until that final gasp. I can't wait to get my hands on the next volume!"
— - Diana Urban, author of