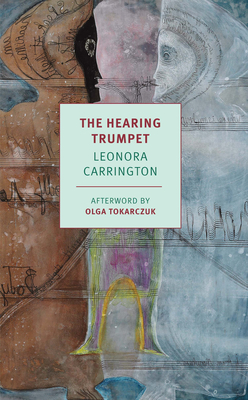 
Available at One of Our Locations
An old woman enters into a fantastical world of dreams and nightmares in this surrealist classic admired by Björk and Luis Buñuel.

Leonora Carrington, painter, playwright, and novelist, was a surrealist trickster par excellence, and The Hearing Trumpet is the witty, celebratory key to her anarchic and allusive body of work. The novel begins in the bourgeois comfort of a residential corner of a Mexican city and ends with a man-made apocalypse that promises to usher in the earth’s rebirth. In between we are swept off to a most curious old-age home run by a self-improvement cult and drawn several centuries back in time with a cross-dressing Abbess who is on a quest to restore the Holy Grail to its rightful owner, the Goddess Venus. Guiding us is one of the most unexpected heroines in twentieth-century literature, a nonagenarian vegetarian named Marian Leatherby, who, as Olga Tokarczuk writes in her afterword, is “hard of hearing” but “full of life.”
Leonora Carrington (1917–2011) was born in England and spent most of her adult life in Mexico City, where she participated in the Surrealist movement as an artist, painter, and novelist. NYRB Classics published her memoir Down Below and a collection of her illustrated stories for children, The Milk of Dreams, in 2017.

Olga Tokarczuk is the author of nine novels and three short-story collections. Her novel Flights won the 2018 International Booker Prize, and she is the recipient of the 2018 Nobel Prize in Literature.
"It’s an extraordinary surrealist tale — hilarious and terrifying — and one that everyone should read. I like surrealism and anarchism in art. I like provocations. Hers is a unique voice, full of light and gravitas at once, a truly revolutionary spirit. A bitter, dark sense of humor that perfectly suits our era, although this slim novel was published almost 50 years ago." —Olga Tokarkczuk, New York Times

“[O]ne of the great comic novels of the twentieth century, The Hearing Trumpet reads like a spectacular reassemblage of old and new genres, the campy, illegitimate offspring of Margaret Cavendish’s romances and Robert Graves’s histories, with Thomas Pynchon’s riotous paranoia spliced in to keep it limber and receptive to the political anxieties of its moment.” —Merve Emre, The New Yorker

“Her 1974 novel, The Hearing Trumpet, newly reissued, stands out as something at last truly radical, undoing not only our expectations of time and space, but of the psyche and its boundaries. . . . [A] mind-flaying masterpiece, held together by Carrington’s gifts of wit, imagination and suspense.” —Blake Butler, The New York Times

"A version of Carrington’s episode in the sanatorium also found its way into a novel, The Hearing Trumpet, written in the fifties or early sixties. But it’s not lightly fictionalized autobiography along the lines of The Bell Jar. Here the experience is transformed into something more fabulist, and much more interesting than the memoir. In the novel, delusions of grandeur become real powers.” —Elisa Gabbert, The Paris Review Daily

“The Hearing Trumpet . . . reads on its parodic surface like an Agatha Christie domestic mystery, but one melted, dissolved by extreme heat into something unthinkably other, and reconstructed as the casebook of an alchemist. . . . It asks its readers to allow the dark, allow the wild and rethink how power works. It is a work of massive optimism. . . . One of the most original, joyful, satisfying, and quietly visionary novels of the twentieth century.” —Ali Smith

“In The Hearing Trumpet, Carrington leans into her starkest eccentricities, depicting the subversive power of womanhood with more imaginative zeal than almost any other 20th century novelist.” —Brady Brickner-Wood, Ploughshares

“The Hearing Trumpet is so inspiring! Free-flowing, spiky imagination. I love its freedom, its humour and how it invents its own laws.” —Björk, The Guardian

“Those of us who are young or middle-aged and who have never been taught how to grow old, will find in this book a perfect model.” —Margot Farnham, Zero

“Reading The Hearing Trumpet liberates us from the miserable reality of our days.” —Luis Buñuel

“Briton Leonora Carrington is better known as a Mexican surrealist painter, but here she creates an extraordinary feminist fantasy, in which old age becomes a riotous adventure.” —The Guardian, “1000 novels everyone must read”

“Even when the plot turns grim, the prose is jaunty, a sign of its author’s reveling in her own perverse imagination.” —Matthew Sharpe

“The Hearing Trumpet is a tremendously weird novel that revels in inconclusive ideas, surreal reimaginings, and the peculiarities of human consciousness. While the deluge of mythology and allusion can occasionally inhibit an otherwise pleasurable reading experience, The Hearing Trumpet’s singular, provocative perspective provides a vivid glimpse into Leonora Carrington’s invaluably frenetic mind.” —Brady Brickner-Wood, Ploughshares

“Magical. . . All [Leonora Carrington’s] work is informed by her status as a witch of some kind.” —Backlisted Podcast