Asking For It (Paperback) 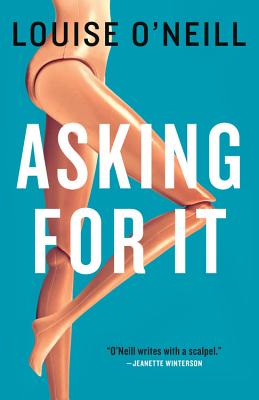 Asking For It (Paperback)


Currently Unavailable
Emma O'Donovan is eighteen, beautiful, and fearless. It's the beginning of summer in a quiet Irish town and tonight she and her friends have dressed to impress. Everyone is at the party, and all eyes are on Emma.
The next morning Emma's parents discover her collapsed on the doorstop of their home, unconscious. She is disheveled, bleeding, and disoriented, looking as if she had been dumped there.
To her distress, Emma can't remember what happened the night before. All she knows is that none of her friends will respond to her texts. At school, people turn away from her and whisper under their breath. Her mind may be a blank as far as the events of the previous evening, but someone has posted photos of it on Facebook under a fake account, "Easy Emma"--photos she will never be able to forget.
As the photos go viral and a criminal investigation is launched, the community is thrown into tumult. The media descends, neighbors chose sides, and people from all over the world want to talk about her story. Everyone has something to say about Emma.
Asking For It is a powerful story about the devastating effects of rape and public shaming, told through the awful experience of a young woman whose life is changed forever by an act of violence.
Louise O'Neill is the author of Only Ever Yours, which won the YA Book Prize, among other distinctions. She was born in west Cork in 1985. She studied English at Trinity College Dublin and has worked for the senior style director of American Elle magazine. She is currently working as a freelance journalist and YA author.
Named a Michael L. Printz Honor Book by the American Librarians Association
A School Library Journal Best Book
A New York Public Library Best Book
A Bustle Best YA Book

"Try to be brave, grown-ups. O'Neill's second novel may be scary, but it is riveting and essential. Teenagers will recognize its difficult truth and devour it--behind your backs, if need be . . . You may be staggered by Emma's inability to make a self-respecting decision, even as her story goes international. But you'll be lit up with pain and rage on her behalf, and grateful for the few who stand by her."
—Jeff Giles, The New York Times


"You won't come away from [Asking For It] feeling happy, but you will come away from it feeling angry and anger is a healthier emotion than despair. If, like me, you're a parent, I might advise you to buy it for your daughters, but actually it would do more good if I begged you to buy it for your sons. . .Young women already know what's between the pages of this book. It's the other people in that room who need to read it."
—LitReactor

"Who is Louise O'Neill? You better brush up, because everyone's about to start talking about her. . .the feisty, funny, and feminist author. . .we've been waiting for, that might actually change something."
—Bustle

"A harrowing novel on the issue of sexual consent . . . this is brave and clever writing."
—Sarah Gilmartin, Irish Times

"O'Neill's writing infects, inches its way under your skin, assaults you with tiny, relentless pinpricks."
—The F Word


"Any piece of writing that deals with rape is going to be affecting. What makes Irish author Louise O'Neill's latest work of fiction so traumatic and infuriating is that the writing was motivated by multiple real-life cases of sexual assault."
—Broadly, Vice


"A must-read in today's rape culture, this novel is a follow-up to O'Neill's first (also wonderfully feminist) novel, Only Ever Yours."
—HelloGiggles

"After reading last year's Only Ever Yours, Louise O'Neill is one of my absolute favorite new writers . . . The title enough should help you see where the story goes from there, and it's going to make you furious, but that's why it's so important."
—Bustle

"This harrowing examination of sex and sexual assault for teens and young adults . . . deserves the broadest possible audience, and to be widely discussed by teens, parents, and educators. With the precision of a scalpel, O'Neill delicately carves out the subtlest ways Emma learns that beauty is supreme, and with equal accuracy hammers home the double standard that still applies to both women and men. The images are haunting, the topic is difficult, and the ending is frustrating yet sadly all too believable."
—Common Sense Media (5 Star Review)


"Vital reading for people everywhere . . . it's clear that O'Neill is blazing her own path in literature."—Guardian

"Louise O'Neill is the best YA fiction writer alive today. Patrick Ness, Malorie Blackman and John Green are all exceptional authors, producers of the finest YA books in recent years, but none of them match up to Louise O'Neill."—Guardian

"Louise O'Neill is having a moment . . . Her aim? To get people talking. To get people angry. To make people furious."—Aoife Barry, The Journal

"You must read this blistering, biting YA novel about sexual consent...It's a difficult, confronting and vital read."
—Elle (UK), Best Books of 2015

"A powerful cautionary tale that will appeal to older teens as well as to adult readers."—Booklist

"Louise O'Neill may still be relatively new to the scene, but the Irish author is already earning comparisons to feminist literary legends like Margaret Atwood, and being declared the best YA fiction writer working today. . .Asking For It. . .will find its way deep under your skin and send a chill down your spine."
—Refinery29


"Asking for It raises hard questions about how society treats rape victims in a way that few other YA books on this subject tend to do. O'Neill's writing is unflinching in its depiction of Emma's pain: raw and harrowing and terribly real. It is provocative in its brace and honest exploration of rape culture and victim-shaming. This powerful book begs to be discussed, and will stay with readers long after they put it down."—Worlds of Words