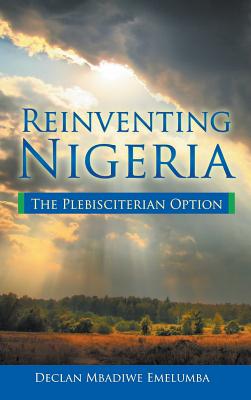 Re-Inventing Nigeria presents a political analysis of the country, showing how to make Nigeria's federation work. It proffers a democratic initiative to keep Nigeria together as one strong united federal republic, while providing a democratic model that other countries with similar multiethnic challenges can emulate.

The book focuses on how the Nigerian Federal Project can be restructured to make it more functional and service driven.

It begins with a historical review, concluding that the foundations of Nigeria were faulty from the start, with no agreement made towards nationhood by the federating units. Instead, Nigeria's different ethnic nationalities held themselves in mutual suspicion, even in contempt, before independence.

A new form of democratic government, called plebisciterianism, is recommended because of its inbuilt recourse to the plebiscite. This ensures that all nationalities are included in the government at any given time.

Declan Mbadiwe Emelumba is from Imo State, Nigeria. He holds a B.S. from the University of Benin and an M.S. in political science from the University of Lagos. He has a post graduate diploma in journalism from Times Institute of Journalism, Lagos. As a secondary school student at St. Patrick's College Asaba, he won the John F. Kennedy Secondary Essay Competition for Old Bendel State, and as an undergraduate, won awards as overall best student in the faculty of social sciences. He started his career as a journalist, working for major Nigerian newspapers, becoming editor and general manager. The author worked as special adviser on media and public relations for the Imo State Governor, and was elected to the Imo State House of Assembly, where he served for eight years. He is presently a consultant on media and legislative matters in Abuja. He is married with five children.