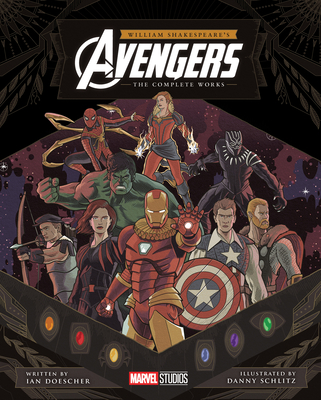 
Ships to Our Store in 1-5 Days
Assemble, Ye Avengers! All four Avengers films are presented as Shakespearean plays in this must-have for Marvel fans.

Authentic meter and verse, stage directions, and clever Easter eggs will delight fans of the Avengers and Shakespeare alike. Readers will experience their favorite scenes, characters, and lines in a fresh—yet fully faithful—way, through soliloquies and dialogue by everyone from Captain America to Groot (“’Tis I!”).

The lavish two-column format recalls Shakespeare’s folios, and dozens of vibrant illustrations capture all the iconic movie moments. This franchise bible elevates and celebrates the films and is a must-have for fans of the Marvel Cinematic Universe and the Avengers.
Ian Doescher is the New York Times best-selling author of the William Shakespeare’s Star Wars® series, the Pop Shakespeare series, and MacTrump. He has written for Marvel Comics and is a contributing author to the story collection Star Wars: From a Certain Point of View. He lives in Portland, Oregon, with his family. Visit him at IanDoescher.com.
“Author Ian Doescher has remixed the familiar “Avengers” films into a format Shakespeare himself would be proud of."—Los Angeles Times

“It’s a lot of fun, seeing the Marvel universe rewritten in iambic pentameter, and trying to spot the actual Shakespeare references sprinkled throughout the text.”—GeekDad

“Great fun, peppered with references to actual plays from the First Folio.”—Broadway Direct

“An extraordinary and unique contribution to the growing library of Marvel Universe fiction.”—Midwest Book Review