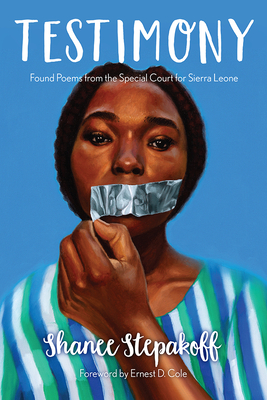 Sierra Leone’s devastating civil war barely caught the attention of Western media, but it raged on for over a decade, bringing misery to millions of people in West Africa from 1991 to 2002. The atrocities committed in this war and the accounts of its survivors were duly recorded by international organizations, but they run the risk of being consigned to dusty historical archives.

Derived from public testimonies at a UN-backed war crimes tribunal in Freetown, this remarkable poetry collection aims to breathe new life into the records of Sierra Leone’s civil war, delicately extracting heartbreaking human stories from the morass of legal jargon. By rendering selected trial transcripts in poetic form, Shanee Stepakoff finds a novel way to communicate not only the suffering of Sierra Leone’s people, but also their courage, dignity, and resilience. Her use of innovative literary techniques helps to ensure that the voices of survivors are not forgotten, but rather heard across the world.

This volume also includes an introduction that explores how the genre of “found poetry” can serve as a uniquely powerful means through which writers may bear witness to atrocity. This book’s unforgettable excavation and shaping of survivor testimonies opens new possibilities for speaking about the unspeakable.
SHANEE STEPAKOFF is a psychologist and human rights advocate whose research on the traumatic aftermath of war has appeared in such journals as Peace and Conflict and The International Journal of Transitional Justice. She holds an MFA from The New School and is completing a PhD in English at the University of Rhode Island.

ERNEST D. COLE is John Dirk Werkman Professor of English at Hope College in Holland, Michigan. His research focuses primarily on post-apartheid South Africa, but he is also interested in body and trauma studies, especially the ways in which bodily injury shapes identity. He is the author of several books, including Space and Trauma in the Writings of Aminatta Forna and Theorizing the Disfigured Body: Mutilation, Amputation, and Disability Culture in Post Conflict Sierra Leone.
“When politics invades lives in the most brutal of ways, what can be fashioned from the aftermath? In these found poems Shanee Stepakoff has taken the testimonies of those upon whom the violence was committed and turned them into a work of witness, Nadine Gordimer’s ‘inward testimony’ that it is the task of artists to deliver. Outwardly the poems in this collection stand as monument to remembrance and commemoration, a stay against oblivion for the people of Sierra Leone whose lives were marked by the civil conflict of 1991-2002. They are a significant contribution to the literature of that country and of conflict.”
— Aminatta Forna

“Of the many forms of human suffering, ethical loneliness—the experience of enduring atrocity only to be confronted with the annihilating cruelty and injustice of remaining unheard—sheds a radiant, hurt light on the very nature and power of language itself. In stark, beautifully calibrated lines, Shanee Stepakoff reaches into that silence to serve and bring forth these necessary voices. Here, the plainest words—‘I saw,’ ‘I heard,’ ‘I walked,’—take on an almost shocking and devastating dignity. As the survivors recount their stories, it is as if each syllable, each word, is a bone stripped bare. ‘He was burning,’ ‘I used to be,’ ‘I was born,’ ‘he was cutting the child.’ At once unsparing and informed by a deep tenderness and care, this darkly luminous work implicitly interrogates the nature of authorship and poetic form, and like all seminal works, helps to question, expand, and re-define their boundaries.”
— Laurie Sheck

“These ‘found poems’ are unquestionably harrowing to read and painful to absorb. Eight survivors of the murderous cruelty and atrocities committed during the civil war in Sierra Leone tell their own stories, and in their own words. Every one of these words is drawn from transcripts of the war crimes tribunals that came with the end of that war. Shanee Stepakoff—a psychologist who has long worked with survivors of torture—brings to these transcript accounts her poet’s sense of lineation, stanzaic structure, pauses, refrains, and repetitions. Thus, she creates a ceremonial space in which we as readers might begin to hear and bear witness to the unbearable degree of violence, suffering, and loss that these women and men endured."
— Fred Marchant

“With this collection, Shanee Stepakoff finally breaks the veil of silence that surrounds the unspeakable horrors of Sierra Leone’s long civil war. She has recomposed the official accounts to offer us both the intimacy and eternality of survivor stories.”
— Remi Raji

"At once astonishing and devastating, these poems attest to poetry’s ability to bear witness to atrocity, while the poignant cover image by Liberian American artist and war refugee Papay Solomon reminds us of those whose voices have been silenced for too long."
— Poetry Foundation